We are back in Rochester now, but I have one more entry that I wrote while we were traveling.

DuPlooy’s is a delight for a nature photographer. I could have happily stayed there for a week or more photographing insects, birds, plants, animals. I hope to go there again in the different seasons to see additional birds and plants in all their various stages of flowering and fruiting.

We saw a series of large mounds from leafcutter ants more than 2 feet in diameter and nearly a foot high along the path down to the Macal River. There were multiple columns of ants marching back to the mounds triumphantly carrying new leaf material for their fungi. It was too dark to get photos. :-(

They have a mutualistic relationship with their fungi, providing them with new plant material to degrade, and in return the ant larvae get to feed on fungus itself. It is a very complex relationship that is actually a ménage a trois involving a bacterium as well. Wikipedia has this to say about leaf cutter ants:

“Their societies are based on an ant-fungus mutualism and different species use different species of fungus, but all of the fungi the ants use are members of the Lepiotaceae [now the family Agaricaceae]. The ants actively cultivate their fungus, feeding it with freshly-cut plant material and keeping it free from pests and molds. This mutualist relationship is further augmented by another symbiotic partner; a bacterium that grows on the ants and secretes chemicals—essentially the ants use portable antimicrobials. Leaf cutter ants are sensitive enough to adapt to the fungi's reaction to different plant material, apparently detecting chemical signals from the fungus. If a particular type of leaf is toxic to the fungus the colony will no longer collect it. The only two other groups of insects that have evolved fungus-based agriculture are ambrosia beetles and termites.The fungus that is cultivated by the adults feeds the ants larvae, and the adult ants feed off of the leaf sap. The fungus needs the ants to stay alive, and the larvae need the fungus to stay alive.”

The next day after hard rainfall all night, the above ground mounds were nearly deserted and the ant activity was sporadic. In the picture below you can see a few ants, 2 of whom are carrying a little piece of leaf. On the right side of the photo you can see where large pieces previously had been cut neatly out of leaves. 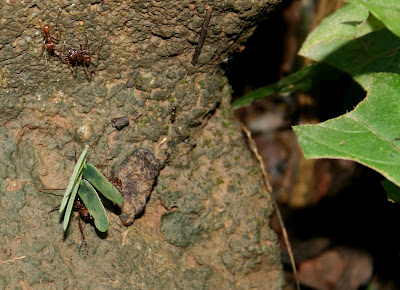 I seem to have thing about assassin bugs; I find them wherever I go. Here is one on a soursop fruit. If you enlarge the photo you can see its impressive looking rostrum (piercing mouthpart). 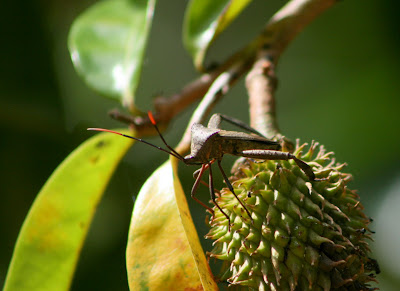 Looking out from our veranda I spotted this little damselfly on its photogenic perch on the tip of bird of paradise flower. 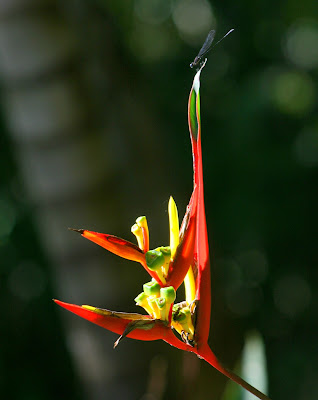 Early one morning this little frog was on the table in the outdoor dining area.  I didn't see any other frogs while we were there, but I am sure there were plenty around. 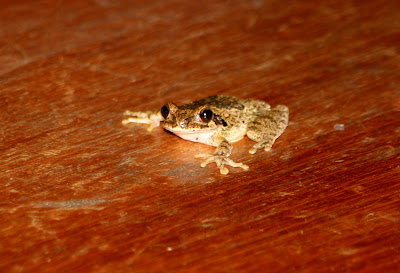 Several times as we returned to the casita we saw a pair of agouti scampering back into the underbrush.  They are sweet looking little beasts, sort of like overgrown guinea pigs.  All I managed to get was this shot from behind right at dusk. 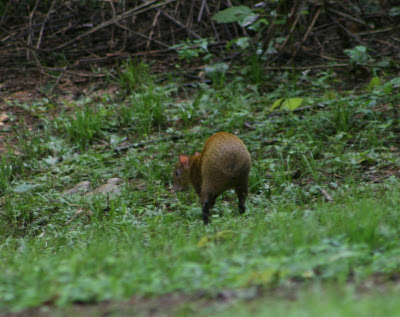 At the deck near the bar is a feeding station that is used to lure in birds and other wildlife.  One evening when ripe bananas were used as bait, this little kinkajou made an appearance.  The staff at DuPlooy's discourage their guests from using flash when photographing these animals at night, so I set my camera on manual with the ISO at the max (1600) and the aperture wide open, and well, here is best I got.  These rarely seen, appealing animals are nocturnal aroboreal mammals related to raccoons and coatis.  They are also known as honeybears. 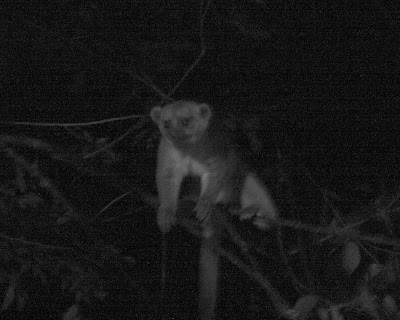 The first night, as we came back from dinner, we found this possum had dropped in to investigate the remains of our wine and cheese on the veranda.  It is a little smaller than the possums in North America, but every bit as toothy. 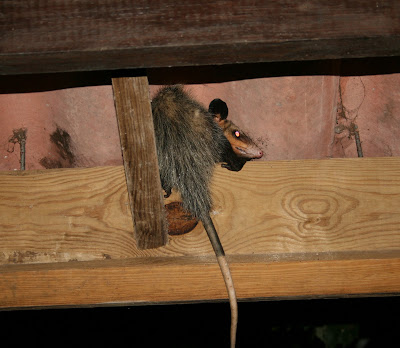 Believe it or not, there were other more fantastic animals that I captured in silico.  Below is a colorful deer mask of a style used in Maya ceremonies. 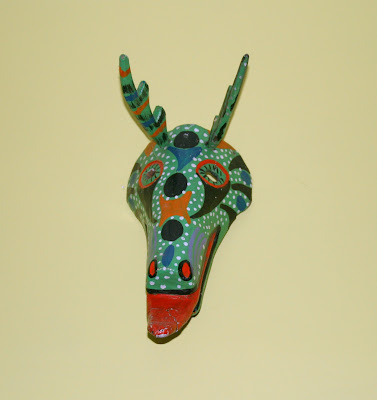 Slightly more realistic is this carving of a jaguar,except of course for the saddle. :-) 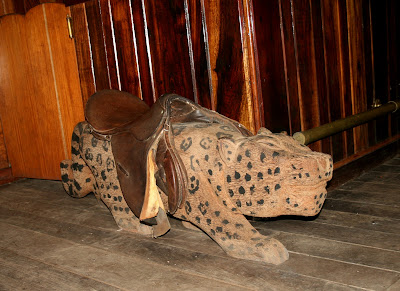 And last of all is this 2 headed dog which kindly served as our luggage rack. 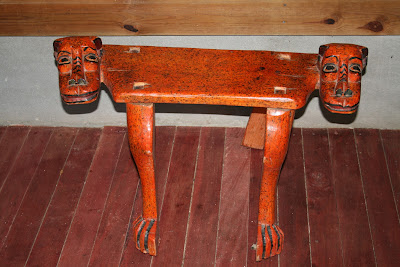 Stay tuned for additional Belize posts including Belize Bird of the Week as I sort through my photos.
Posted by Wilma at 8:08 PM