How can I not take pictures of dawn when it is so spectacular? 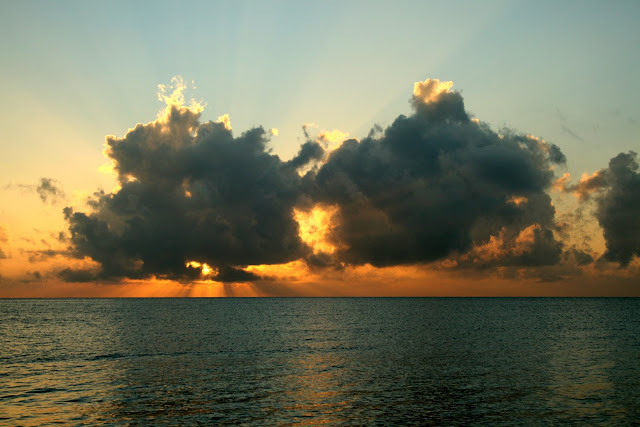 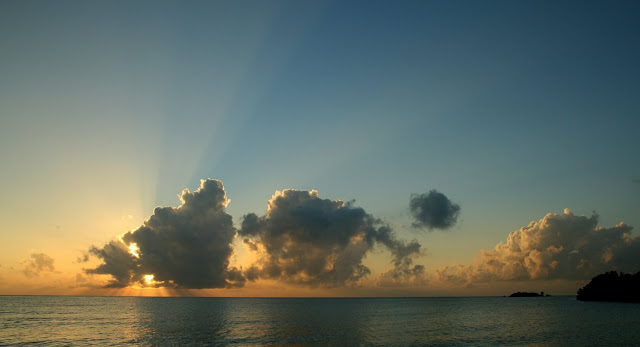 I found a group of newly hatched, tiny, caterpillars on one of our mango trees.   I think these wee beasts grow up to be big, leaf-crunching beasts.  I am trying to rear them to see what they turn into.   I'll try to ID them.  In the meantime, I am keeping them supplied with fresh mango leaves.  The one below is already 2 or 3 times as big as was when I found them.
More as they grow...

Laundry in the Sunshine

Woke up to a beautiful, sunny dawn promising a delightful day.  This was after a torrential downpour that lasted about 3 hours yesterday evening.  We finally got some serious rain (4 or 5 out of 11 water vats are full now, a good start) following almost 10 days of cool, drizzly weather that provided neither warmth nor water – the worst of all combinations.

So what did we do this fabulous day?  Probably what everyone else around here was doing – washing clothes and hanging them out to dry!  When you generate your own electricity, you don’t waste it on drying clothes.  We don’t own a clothes dryer down here.  In fact, we don’t own a washing machine; I washed the linens in the double kitchen sink, using hot water heated in the kettle on the stove (we also don’t have a water heater).  Dennis helped me wring them out and get them on the line.  Who needs  a gym for a workout? We also aired out the mattress.  The previous 4 or 5 nights the bed had felt a little damp when we went to bed.  Not a pleasant sensation. I had visions of turning green with mold starting at the toes.  The hard work is done and now the sun is doing its job with help from a nice breeze.  I am looking forward to getting our solar power system installed so we can splurge on a washer and water heater.  Doubt we will get a clothes dryer; I really prefer line drying the clothes.

The other morning I took photos of a lovely dawn as it unfolded across the sea. 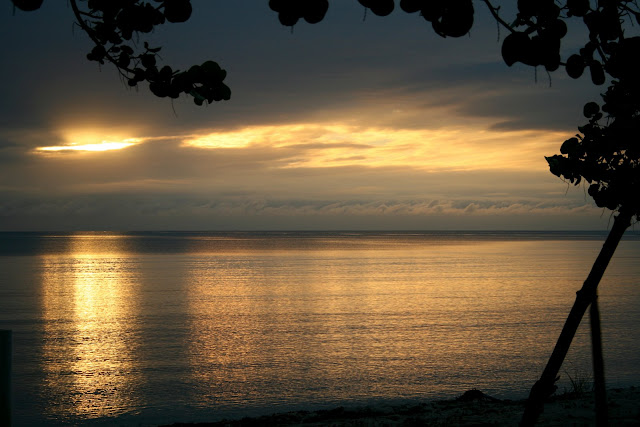 A great blue heron flew from our south beach across to Great Monkey Cay for its breakfast fishing. 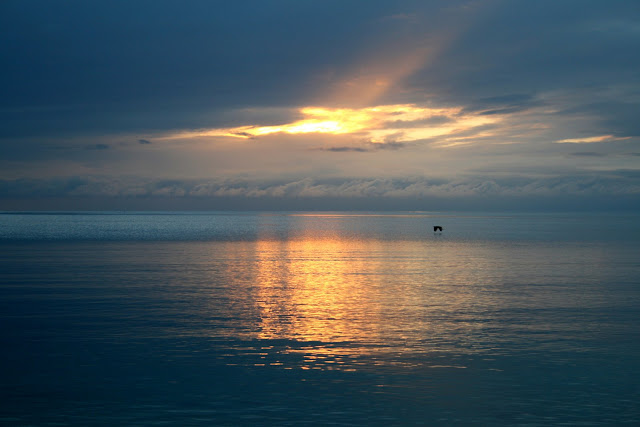 Those low clouds on the horizon came over and kept us cool and damp for most of the day.  Dawn was the highlight.  :-( 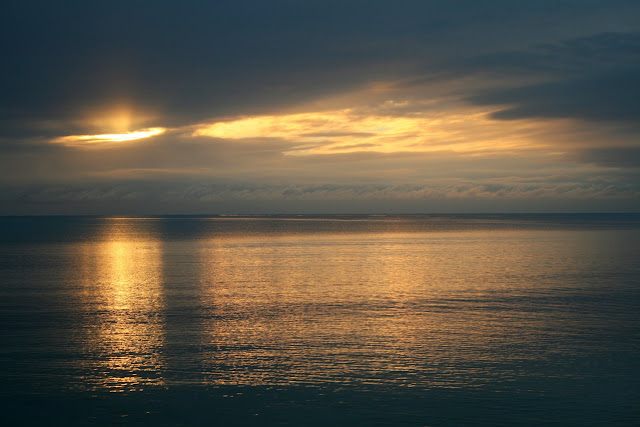 The shot below is of a red lored parrot in our old mango tree.  I took it from the top of the steps, hand holding my long lens, so it is not very sharp.  The parrots have been stopping by lately to see what is ripe.
We don't yet, but when we do, I should be able to get some better photos.

Thanks to Ben Coulter and the other folks at BugGuide for the ID of this caterpillar, that I had photos of in the previous post, as Acharia horrida.  Slug caterpillars have worldwide distribution, mostly in the tropics.  The one Americans are most familiar with is the saddle-back caterpillar.  Most, maybe all, the caterpillars in this family have poisonous setae.  The photos online show the adult moth as a drab brown thing that non-Lepidopteran fans would not look at twice.

The brown jay in the photos below is no dummy - it knows to wipe all the setae off before enjoying dinner. It worked for almost 10 minutes on this one caterpillar before swallowing it, moving to several new branches to wipe the setae off.  I took a lot of photos.  :-)  The best are below, and some of them are almost a movie.  This particular brown jay is in its second year.  You can tell that because it has lost the eye-ring and has only touches of yellow left on its bill.  I also saw adults displaying this same behavior.  In the final shot you can just make out the remains of a gooey mess in its bill. 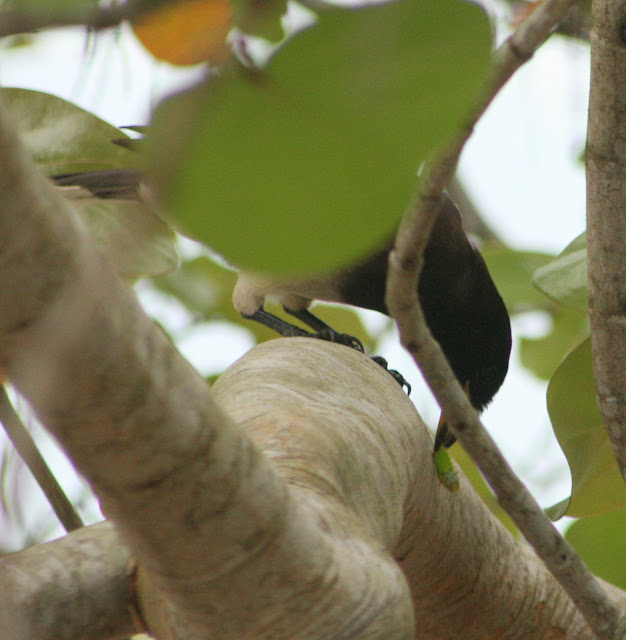 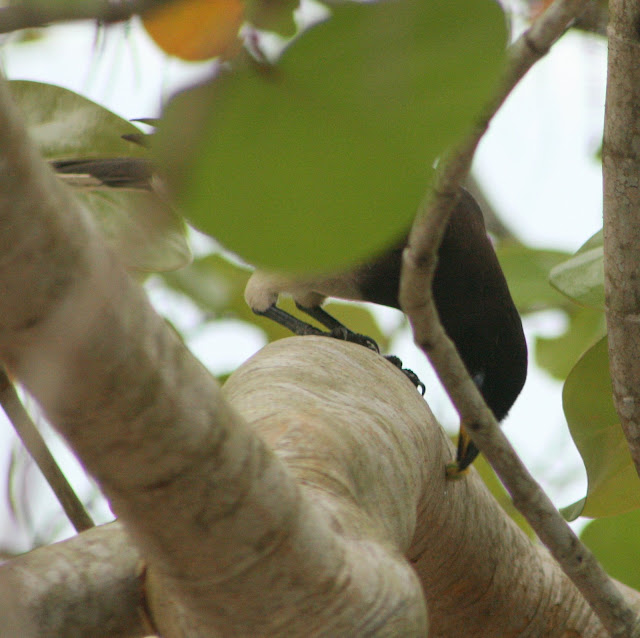 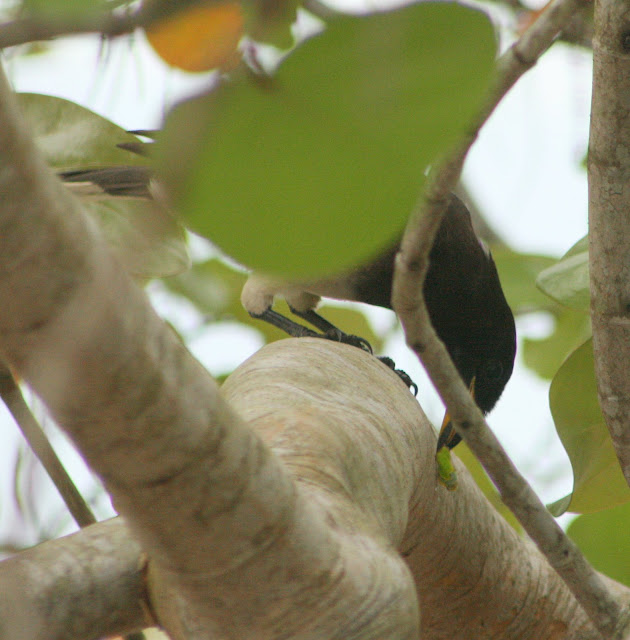 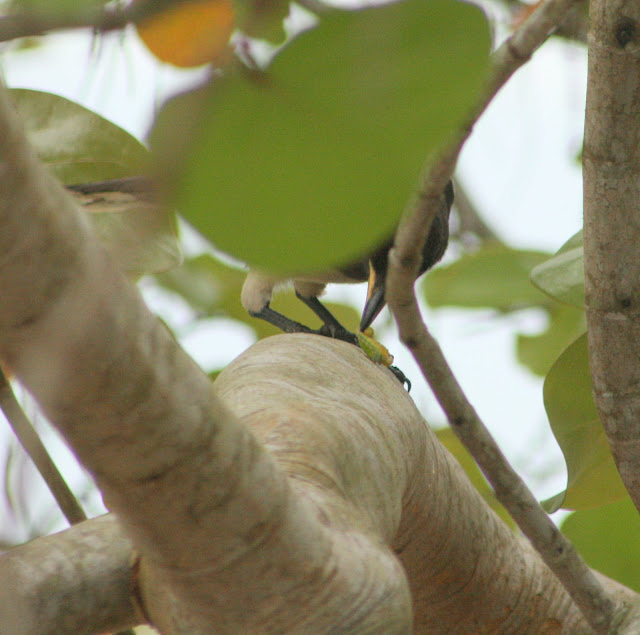 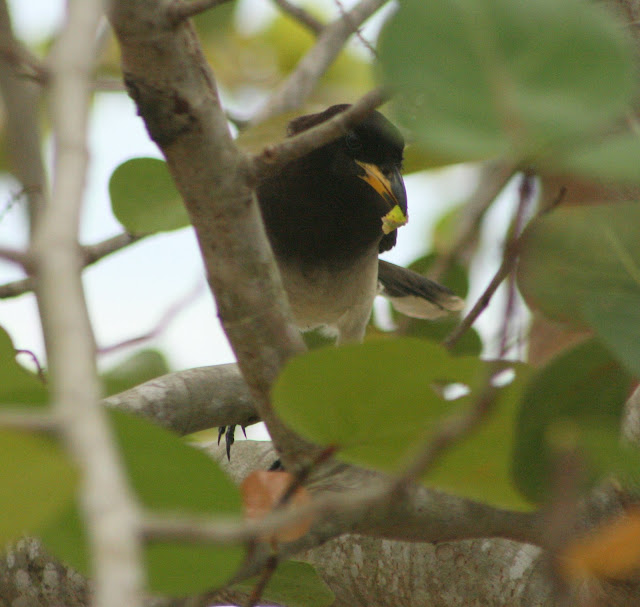 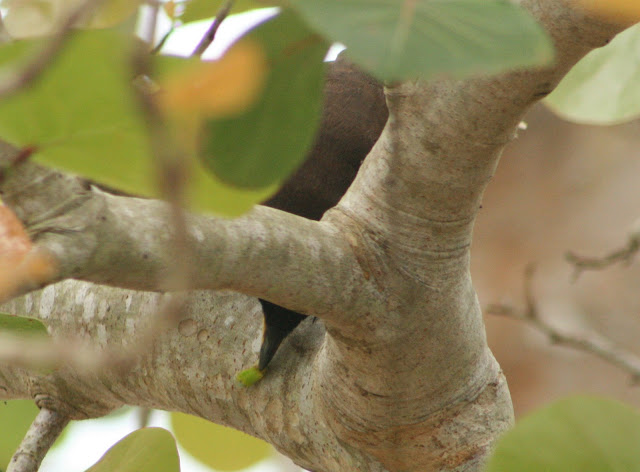 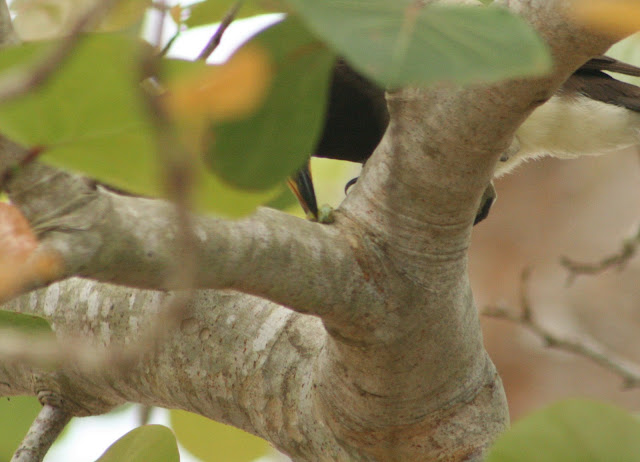 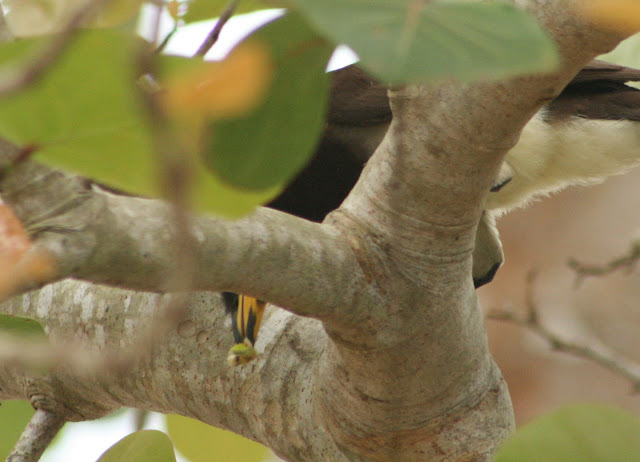 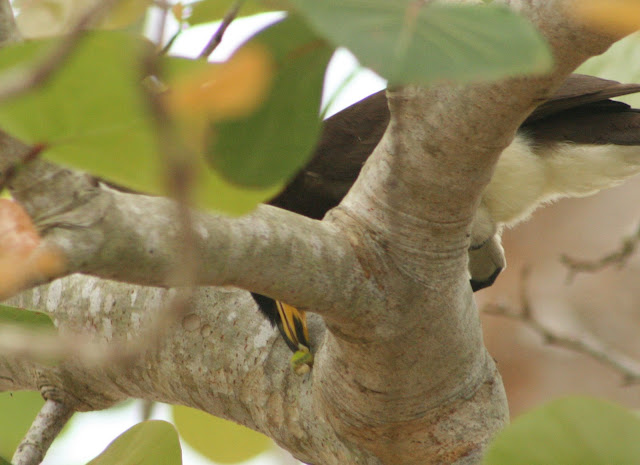 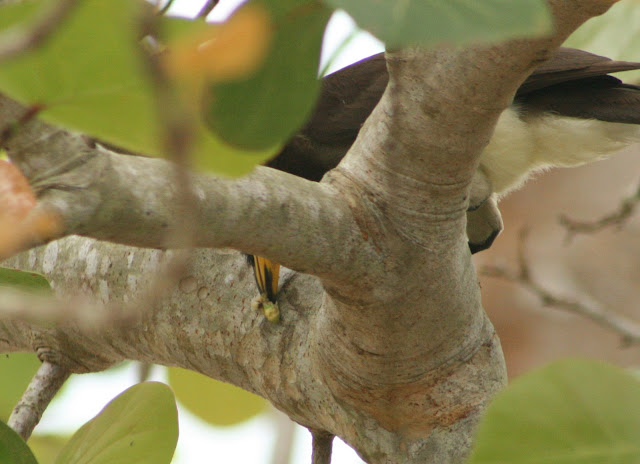 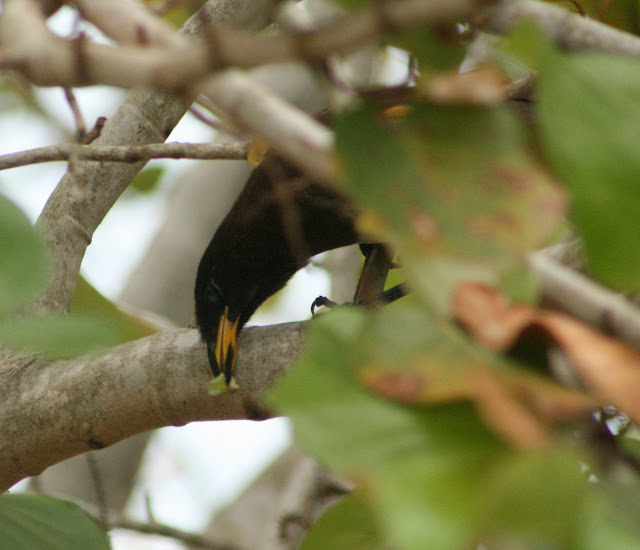 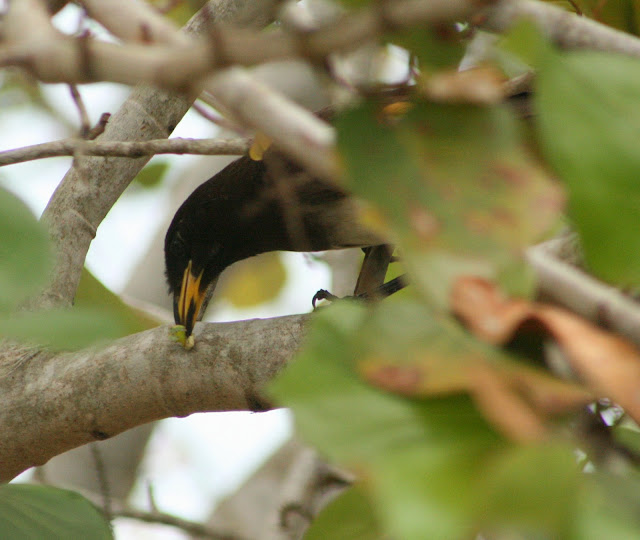 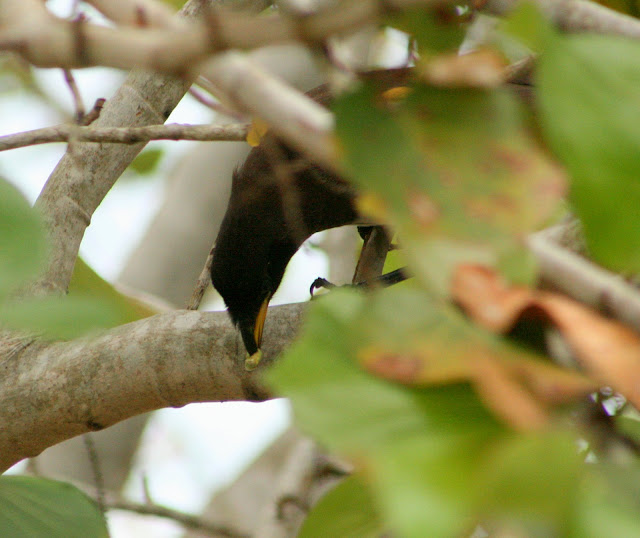 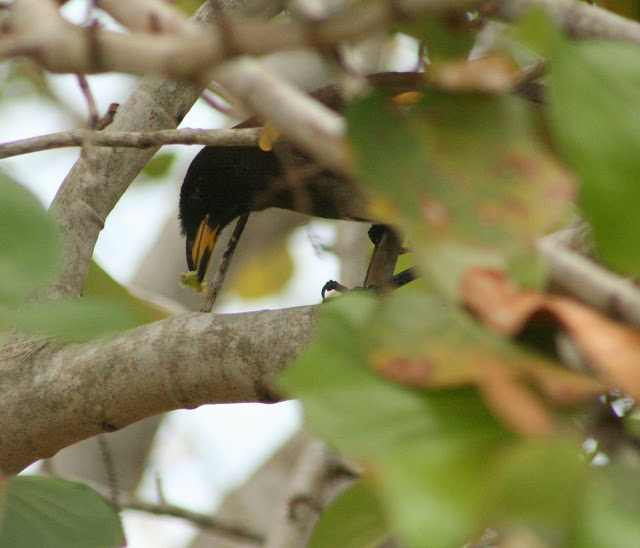 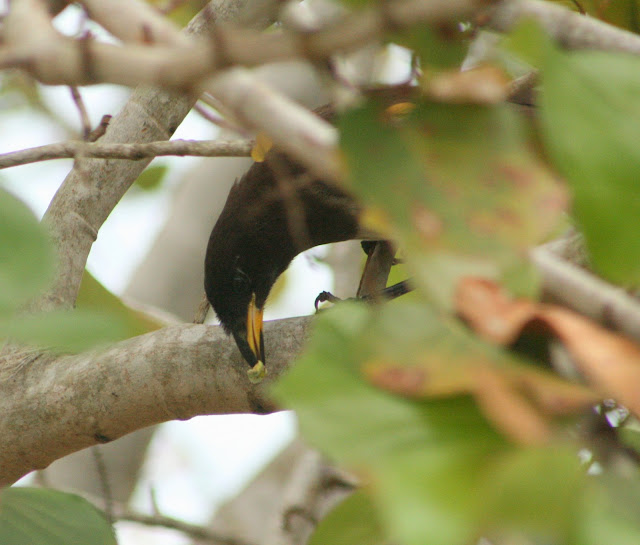 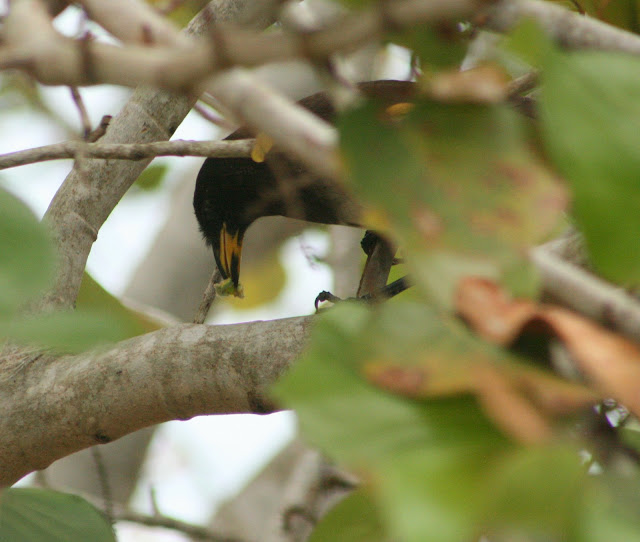 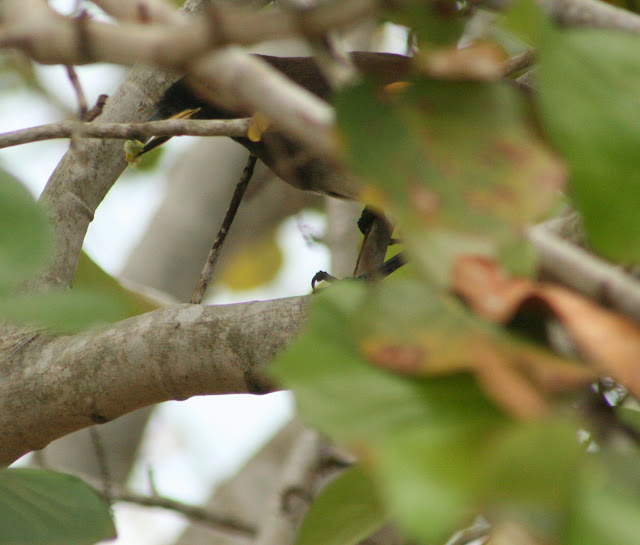 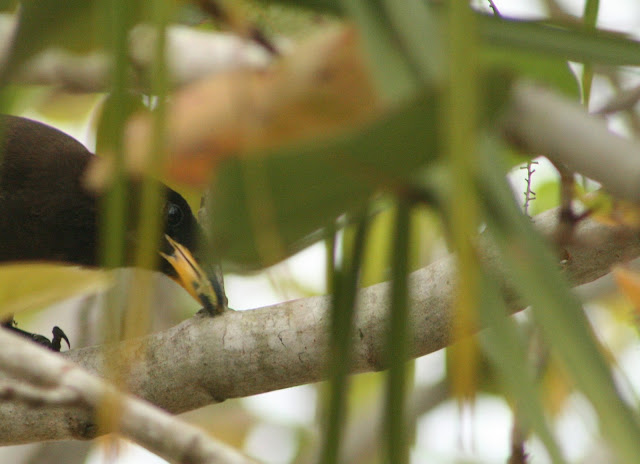 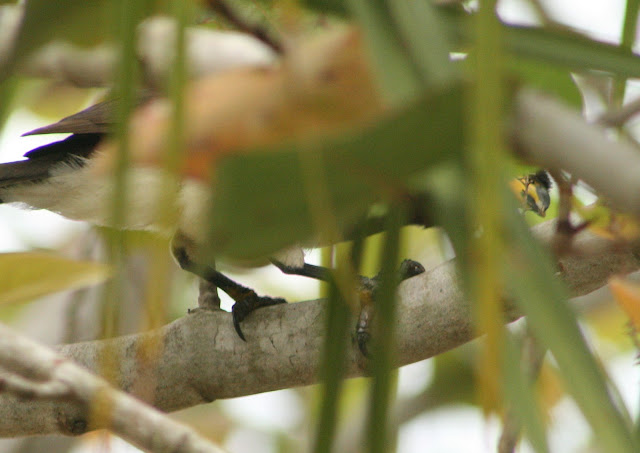 Mofongo and A Jay's gotta eat, too!

We had some green plantains, so Dennis decided to make mofongo.  For those of you not familiar with plantains, they look like bananas on steroids; which isn't surprising since they are close relatives of bananas.  Unlike bananas, you can't eat plantains raw.  But there are so many things you can make from plantains.  I haven't met a plantain I didn't like.  ;-)  You use green plantains to make savory dishes, like mofongo and tostones, yellow plantains to make some dessert-type dishes as the starch starts to turn to sugar, and fully ripe black plantains to make other things I haven't tried yet.  So far I have eaten our plantains before they got that far!

So Dennis set out to make mofongo, which he had never made before.  I have eaten it several times and really enjoyed it.  If there are any mofongo purists reading this, you may want to avert your eyes from the upcoming description!  Every recipe we have seen for mofongo calls for bacon or other fatty pork.  I thought this would be a problem for Dennis since he does not eat red meat; he only eats fish, shellfish, or poultry.  So I was surprised when he bought real pork bacon for this recipe instead of turkey bacon which he could not obtain.  I knew then that he was determined to make real mofongo.  So much for good intentions.  I helped him peel the green plantains which he then sliced into 2 inch thick sections before frying them in deep oil.  For the first batch, he had the temp too high or cooked them a little too long, because the outside got hard and crispy.  The next ones were a little better, but still too hard.  We used them any way.  The next step calls for smashing the cooked plantains with oil and garlic  and then add in the crumbled bacon to make something akin to very dry and lumpy mashed potatoes.  This was difficult to do with the over-cooked plantains, but we persevered and added extra oil to compensate for the dryness.

Normally mofongo is served in large balls formed from the mashed plantains.  Sometimes the balls are stuffed with other meat or fillings.  Ours was still too dry so we added some cooked calaloo (sort of like spinach but tropical) and mushrooms to try to make it more moist.  It tasted pretty good at this point, but we planned to eat it the next day, so Dennis put in the fridge.  When he got it out the next day it was drier than ever!  The chunks of plantain were hard and stiff, totally inedible.  So I suggested that he steam it.  He did and it actually worked, although I don't think the end product actually qualifies as mofongo, it did taste pretty good.  But it tasted best when stuffed in those peppers with brie cheese.  We will explore that taste combination in future efforts, but will try for a more traditional mofongo first.

We were sitting on the veranda (that's where we are most of time, it seems) and I say a brown jay on a palm frond, which seemed unusual. It was hopping along the rib so I got some photos of it.

It joined its sibling on another frond and the sibling (to the rear) had something in its beak.
It finally dawned on me that it was either trying disarm a wasp or perhaps scrape stinging hairs off a caterpillar.  So I went out to see what I could find on the palm fronds.  I found one large caterpillar about 2 inches long on the underside of a palm frond.
I took photos from as many angles as possible.
I was going to watch it throughout the day to see if I could tell which end is which, but within a couple of hours, this one was dinner for a brown jay.  I'll keep an eye out for others and also try to key this one out.  Hope to have an update soon.

Back in November, Richard, Craig, Joe, and Lloydie had poured concrete in 2/3rd of the space below the cabana. It turned out great.  We left the last 1/3rd to do until later so we could move the water vats off the sand onto the concrete and then pour concrete where the vats had been.  This time Dennis was part of the crew and Seven took Joe's place.  In the photo below you can see Dennis shoveling the newly mixed concrete into the wheel barrow so it can be poured on top of the wire mesh between the forms just behind Dennis.  The concrete is all mixed by hand; it is actually faster than the little motorized concrete mixer we shipped down.  Live and learn.
It progressed very quickly; the guys were good.
With everybody working hard, the work got done in just one day instead of one and a half.
The finished product looks great!  We'll have 5 vats across the front and 4 more along the side we just poured.
It will be much easier to keep clean and dry now.
After finishing early, Dennis took the crew for some liquid refreshment at Craig's bar.  They got there just before the rain came.
The next few shots are all from the same perspective with different atmospheric conditions.