Safe and Sound in Englishtown, Belize

We are safe and sound here in Englishtown, Belize.  Not sure yet how the rest of the country fared.  The last radar image we saw last night showed all Belize covered by Earl except for a tiny little triangle that happened to include us.  We had a little rain, maybe an inch or 2 so far - it's still falling, and lots of wind from the northwest.  A tiny bit of rain blew in the back door.   We hardly even heard the wind, but the rain on the tin roof makes for a noisy night!  Right now the sea is within normal for waves and tide height and the beach is intact.  Some branches down.  I am off now to take care of the neighbors' dogs.  It is still raining, but not too hard.  Details and photos later.  Things are good.
Posted by Wilma at 7:25 AM 26 comments:

and I am a Tropical Storm hurricane-to-be with wind speeds approaching 60 sustained wind speed of 70 mph.

Looks like the center of Earl is still going to make landfall north of us on Wednesday night.  Chances are good that Earl will be a hurricane by then.  The best thing about Earl being north of us is that due to the counterclockwise rotation of the storm, the winds will be coming at us from the northwest, which is over land.  That means we shouldn't have a huge storm surge and that the wind speeds will be dampened a bit as the winds pass over land.

We decided to put up the hurricane shutters on all the upper level doors and windows and along the north sides of the verandas and part of the west side.  We got all that done today and are very pleased with the results.  Tomorrow morning we will put up the shutters on the exposed west side.  Depending on storm forecasts and projections, we may put all of the shutters up.  Hurricane shutters are up along the north, west, and south sides of the cabana.  We will probably put u the east-side shutters late this afternoon.  The latest map is at the bottom of this page.

Here is what Earl looks like at around 6:00pm, our time.


We feel good about our preparations and need to see what tomorrow brings.  We will have to decide by 10:00 am if we want to evacuate.  Right now, evacuation is unlikely to be necessary, but things could change quickly.  I will try to post an update in the morning; it all depends on if we have internet signal.

We are keeping a close eye on a "Tropical Wave" that as of this morning is tracking just south of Jamaica and is headed our way at ~20mph.  Here is a screen shot from the US National Hurricane Center as of Tuesday 2 August. 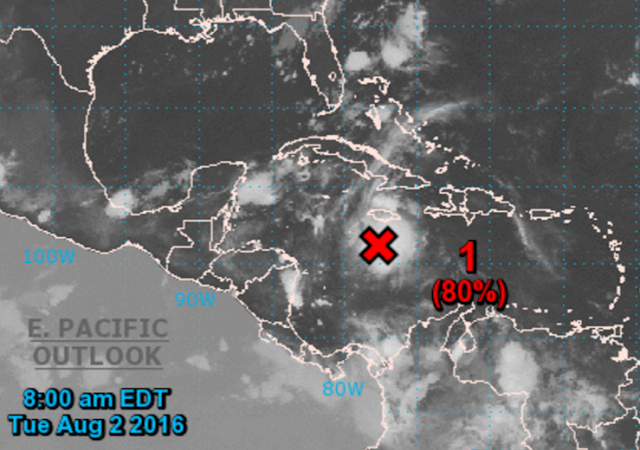 The center of that red X would be directly over our place if it tracks due west.  Fortunately, for us anyway, the models all project it tracking on a curve to the northwest toward the top of Belize.  Even then, the bottom edge of the storm will pass over us.   And of course, the models could be inaccurate at this point.

The "Tropical Wave" has an 80% chance of becoming a tropical cyclone.  It will likely continue to strengthen and chances are good that it will become a tropical depression or even a hurricane before it makes landfall.  At this point, the least we are expecting is sustained winds of 45mph and heavy rain for about a day starting late Wednesday or early Thursday. It could develop into something more serious, so we are watching the forecasts very closely.

We are in Phase 1 of Hurricane Preparedness which means we are clearing everything off our verandas and removing things like fallen coconuts away from the building.  As the storm gets closer, we will seal our water vats.  If the storm develops in strength, we will enter Phase 2 and put hurricane shutters up all along the perimeter of screened in verandas and over all the windows and doors of our cabana and the caretaker's cabana.  We had a dry run for this a month ago, so we know that we have everything at hand.

I will try to post more as things develop; right now I better get busy locking things down.