One afternoon while we were in Belize this past April, Dennis and I walked up the beach to visit our friends Sue and Chris at SteppingStones Resort. When we returned to our cabana, we saw a new hole torn in the screen on the veranda. Now our veranda is our primary living space. We use it as our dining room, sitting room, place to chill, and place to entertain guests. 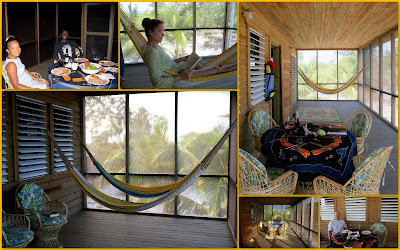 You readers know that I love Belize, but there is a fly in the ointment. Or should I say flies in the ointment, sandflies, that is. Sandflies are aggravating little beasts no bigger than a speck (a 1/16th of an inch speck, to be exact). Where there is one, there are hundreds. Usually the sea breeze keeps them away, but when the breeze slacks off, the sandflies make you miserable with their constant biting. The first time we experienced sandflies in Belize while on vacation there in 1998, their bites left a tiny little flat, red circle about 3mm in diameter, and they hurt a little at the time of the bite. But the next day the sites of the bites were big red welts that itched like crazy! It took more than a week for the bites to fade away. And of course our legs and arms were covered with dozens of bites; we looked a mess.

The worst part is that sandflies are more numerous when there is no breeze and more active at night. That means that any part of your body not covered by a sheet on a hot, still night will be bitten. Covered with a sheet or covered with bites, those are your choices! So when we designed our cabana, we decided to use a very fine screen on the windows and veranda to keep the sandflies out. We had to purchase the screen in the US and take it down there with us. It turns out that the best screen is made out of nylon and you can get it pre-treated to be resistant to degradation by UV light. Even with that treatment, the screen gets fragile quickly and has to be replaced every 2 years or so. And we wind up having unsightly patches on it just to make it last that long.

So when we came back to the cabana that afternoon after visiting Sue and Chris, we immediately noticed the big hole in veranda screen and wondered how it got there. Had a twig been blown into it? No twig in sight on the veranda or on the ground below. As you could tell from the photos, the cabana is 12 feet off the ground, so it wasn’t a crab. But we patched the screen and forgot about it as we about our business.

Dennis went inside to get something and then I hear “Wilma, get your camera and come see what made the hole in the screen!” It was a bird that was still in the cabana. Poor thing had flown through the screen and hadn’t been able to find a way out. I took a couple of pictures of it clinging to the wall. Then we opened the back door and tried to shoo it out. No dice. We took screens off the windows and tried to herd it out. But it just couldn’t see that as a way out because of the louvers. Finally it was in the back bedroom which has 3 windows. Dennis took the screen off 1 of them and the bird was perched on the 3rd. I took a few more photos as Dennis took the 2nd screen down. By this time Richard, our caretaker, was helping us. Richard and I blocked off the doorway as Dennis moved toward the bird. In desperation, it finally flew to freedom through the 2nd window.


It was a very pretty little brown bird with a slightly curved, longish bill. 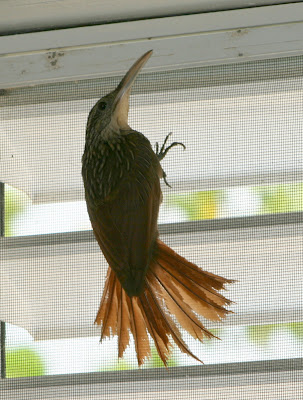 A friend from the village (Ralph Zuniga, who runs a wildlife tour business) stopped by to visit. As usual, we sat on the veranda with Ralph, catching up with each other since our trip last October.  Ralph was the person who first showed us this property back in 2004 (click here to read about this trip). Ralph and his wife Ilna helped us immensely before we started building on the property. We showed Ralph the bird photos and he said it was a wood creeper, either a streak-headed or an ivory-billed. 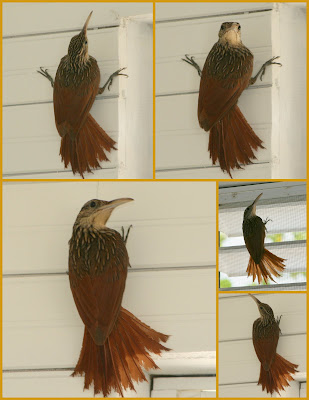 After looking at all the pictures and descriptions in bird books and online, we are pretty sure it is an ivory-billed Woodcreeper. It has the creamy chin with no streaks, streaks down its breast and from the top of its head down its back.  They live year round in Belize and the rest of the Yucatan Penninsula and are fairly common birds of the forest.  We will definitely be on the lookout for more of these when we go back in October.

I had always thought that the Baltimore Oriole was named after the city of Baltimore in Maryland. Well, I was wrong. It turns out that both the bird and the city were named after Lord Baltimore, Cecilius Calvert, 2nd Baron Baltimore (Ballimore), who, following through on his father’s intentions, founded the state of Maryland. The Baltimore Oriole was first described in1731 by Mark Catesby in his Natural History of Carolina, Florida and the Bahama Islands. Catesby named this bird the “Baltimore-Bird,” because black and orange were the colors of the Baltimores. 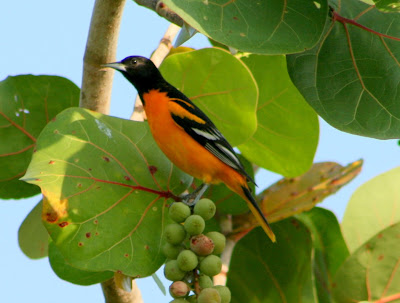 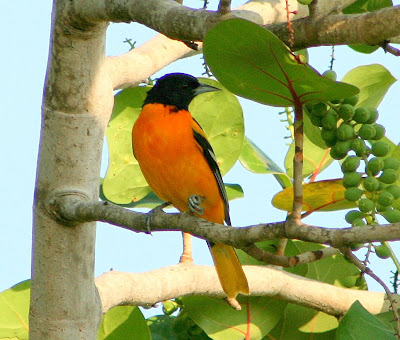 The Baltimore Oriole winters in Belize, southern Mexico, and other Central American countries. It migrates to the eastern United States where it breeds in summer. I’m not sure if Baltimore Orioles are seen around our place in Englishtown Belize all winter long, or if they were just migrating through while we were there in April. They seem to like the sea grapes as much as the Golden-Fronted Woodpeckers do.  :-) 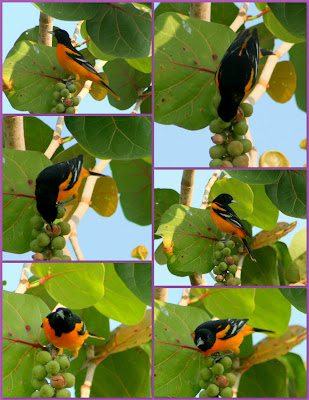 Orchard Orioles look very similar to Baltimore Orioles, except with dark chestnut instead of bright orange. They are also a little smaller than are the Baltimore Orioles. They spend a very short breeding season in the north, returning to Mexico and Central America as early as July. I saw only one Orchard Oriole during the 2 weeks we were in Belize, and the photos are not very good. But they are good enough for an ID! 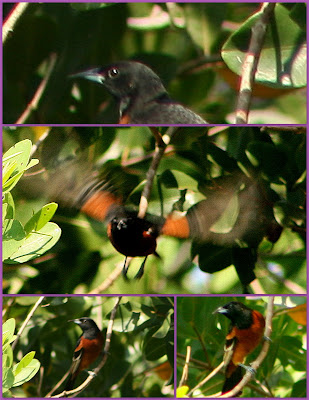 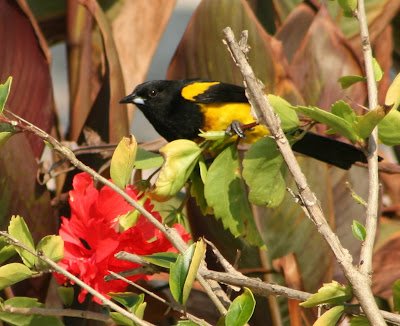 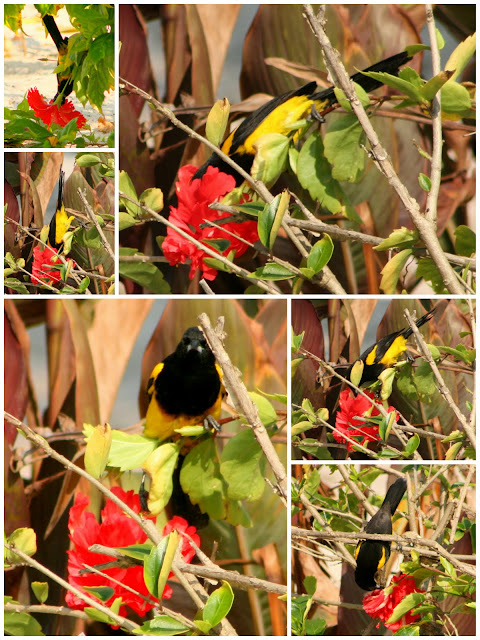 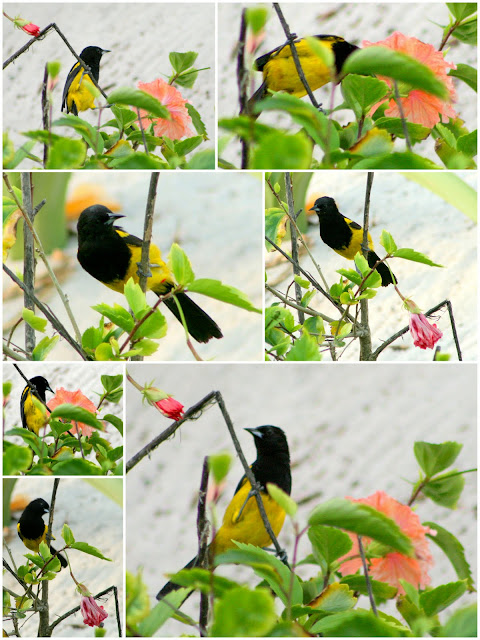 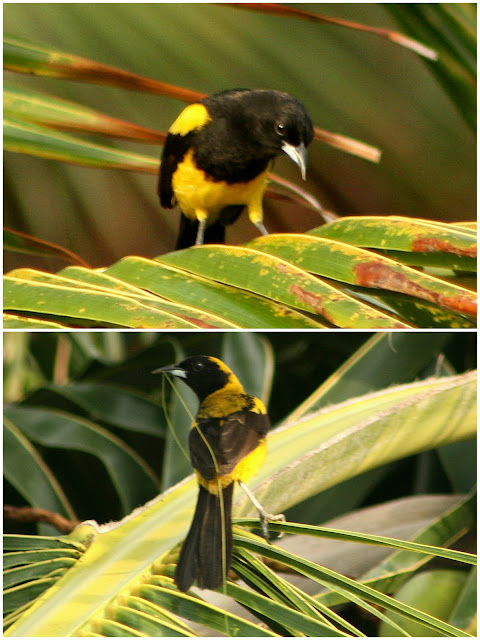 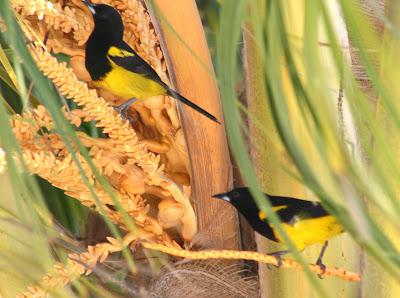 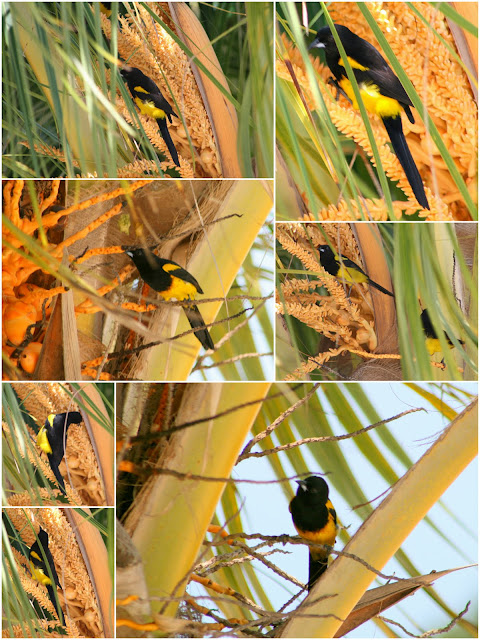 All of these photos were taken just outside our cabana. When they are intent on feeding, you can get quite close to them. In fact I was too close to them feeding on the palm flowers to use the telephoto lens; I had to use my normal lens instead.
I couldn’t get an accurate count of them because they are very busy birds, but I estimate that we saw at least 7 different individuals feeding right around the cabana during the 2 weeks we were there in April. The black-cowled orioles are year-round residents of Belize. I look forward to getting to know them better.
Posted by Wilma at 4:37 PM 7 comments:

Below is a female golden-fronted woodpecker in a cecropia tree.  What long toes she has! 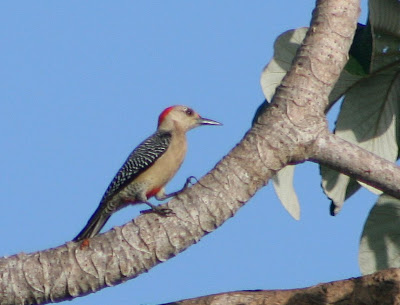 This one is in a sea grape tree.  You can see a bit of the red nasal tufts in this perspective. 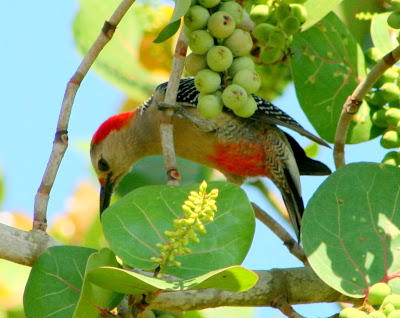 Even though the coloring differs by location, it is considered one species with four forms. I must confess that I am puzzled by the name because I sure don’t see any golden anywhere on these birds unless the name refers to the nasal tufts of the form seen in Texas and Mexico.

And here is a shot of a female in a papaya tree.  The red on the head of the females doesn't come all the way to the front as it does in the males. 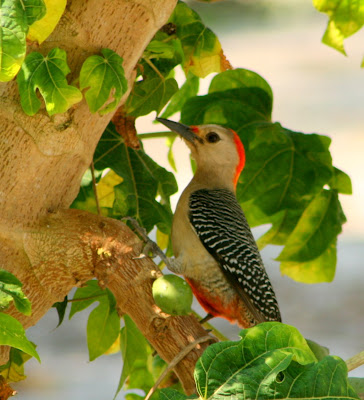 These woodpeckers are big fruit eaters and eat fruit in preference to insects when fruit is available. I observed them eating fruit of the sea grape, papaya, and the Cecropia (trumpet) tree. They seemed to especially like sea grapes and spent hours in the sea grape trees eating the just ripening fruit.  The series of shots below shows the female (turns out that it is only the female that I got good shots of) peeling a strip of sea grape flesh off the still unripe grape.  The sea grape is mostly one large seed with only a thin layer of flesh; the woodpecker really worked hard for such a small prize! 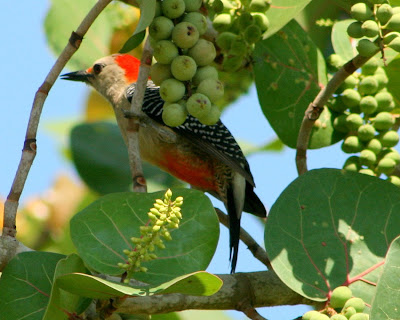 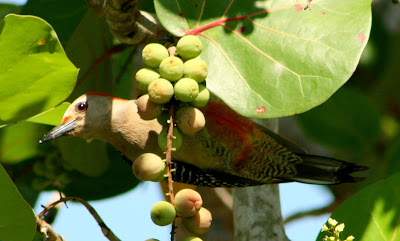 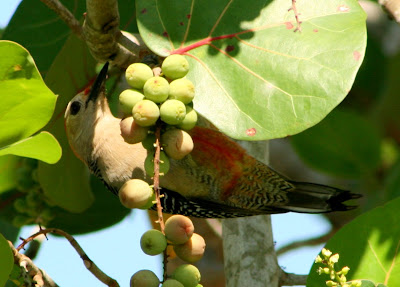 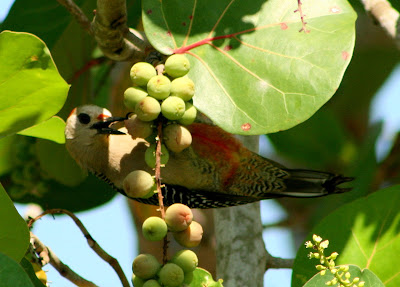 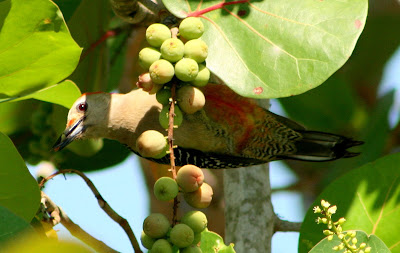 To end this post I have images of a bright orange star fish in the shallow water with the eel grass and a view of Great Monkey Cay (pronounced “key”) just off shore. 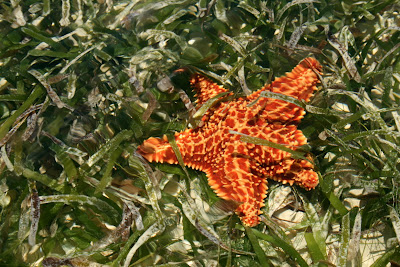 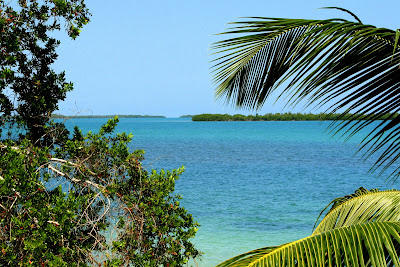 Those golden-fronted woodpeckers sure have a good view!
Posted by Wilma at 6:40 PM 15 comments: