Last evening, we saw a tiger heron on our south lot.  There was not enough light left for photos, but I spent a long time watching it hunt for crabs in the deepening dusk.  What a bird!  It moved in slow motion as it eased up on its prey, first shifting its weight to its front foot, then slowly lifting the back foot, bringing it forward, and setting it down ever so gently.  Then it lowers its head forward with its neck extended.  Still not moving its feet again, it retracted its head a bit and then slowly wagged its now prominent chest from side to side - almost like a horizontal metronome before resuming its slow forward progress.  I saw it go through this stalking series several times, but before it caught dinner, I had to retreat back into the cabana as the evening mosquitoes feasted on me for their dinner .  :-(.

This morning, though, we did see it catch a shore crab and knock it senseless before swallowing it.  And, although the morning was quite cloudy, I did get some shots.  The following are all cropped pretty heavily (because I don't have a long lens yet!), but not too bad given the circumstances.
Not finding any crabs in their holes, it wandered under a Noni tree toward the back of the property where the Mangrove swamp is.
On its way to the mangrove swamp, where Tiger Herons love to hang out and nest, it had a little fluff up, as seen in the series below.

After watching the tiger heron, I went to check on the American redstart that hangs out in the small orange tree.  To my surprise, in addition to the redstart, there was another warbler that I did not recognize.  It took no notice of me as I snapped away at it; it was focused on catching its breakfast while I was attempting to focus on it.  It moved around very quickly, in stark contrast to the slow-motion tiger heron.  As it foraged on the insects in the sparse grass, it hopped closer and closer to me.  A very pretty little bird that Dennis identified as a female Magnolia Warbler.
She hopped around, very actively feeding on little insects.
She pranced and danced and fluttered around, showing off her good side - and they are all good sides!

A fun morning of bird watching with the continued sounds of construction in the background.

While we admit to being focused on our construction project, there are times when tropical Belize gets our attention.  Such was the case about 3 weeks ago when we looked out from the veranda (where we spend most of our waking hours) and spotted an unusual long green thing on the beach amongst the drying Sargassum seaweed.  Now, we often see a green iguana making its way up and down the beach, but this was much longer than the iguana.  As you undoubtedly surmised from the title of this post, we had a snake on the beach!
These snakes are native to Central and the northern part of South America.
Its slow, sinuous glides moved it remarkably quickly across the sand and various sticks and logs.
That pointy head houses its rear fangs.  It preys upon small rodents and lizards. From above, it bites them on their heads and lifts them into the air until the quick-acting venom works before swallowing them.

Even thought they are venomous, green vine snakes are not dangerous to humans, unless you happen to be a particularly stupid human and stick your finger down its throat.   Even then the bite normally causes at most a little numbness.  Of course if you are particularly stupid and also terribly unlucky, then you could have an allergic reaction that might be more serious.  Not being stupid, I kept my fingers on my camera.  ;-)
I back off from it a little bit and it decides to continue on its way toward a Noni tree.
I circled around from the other side for another angle.
It made a break for the Noni trunk and was up the tree in a flash.
This is a very agile snake. 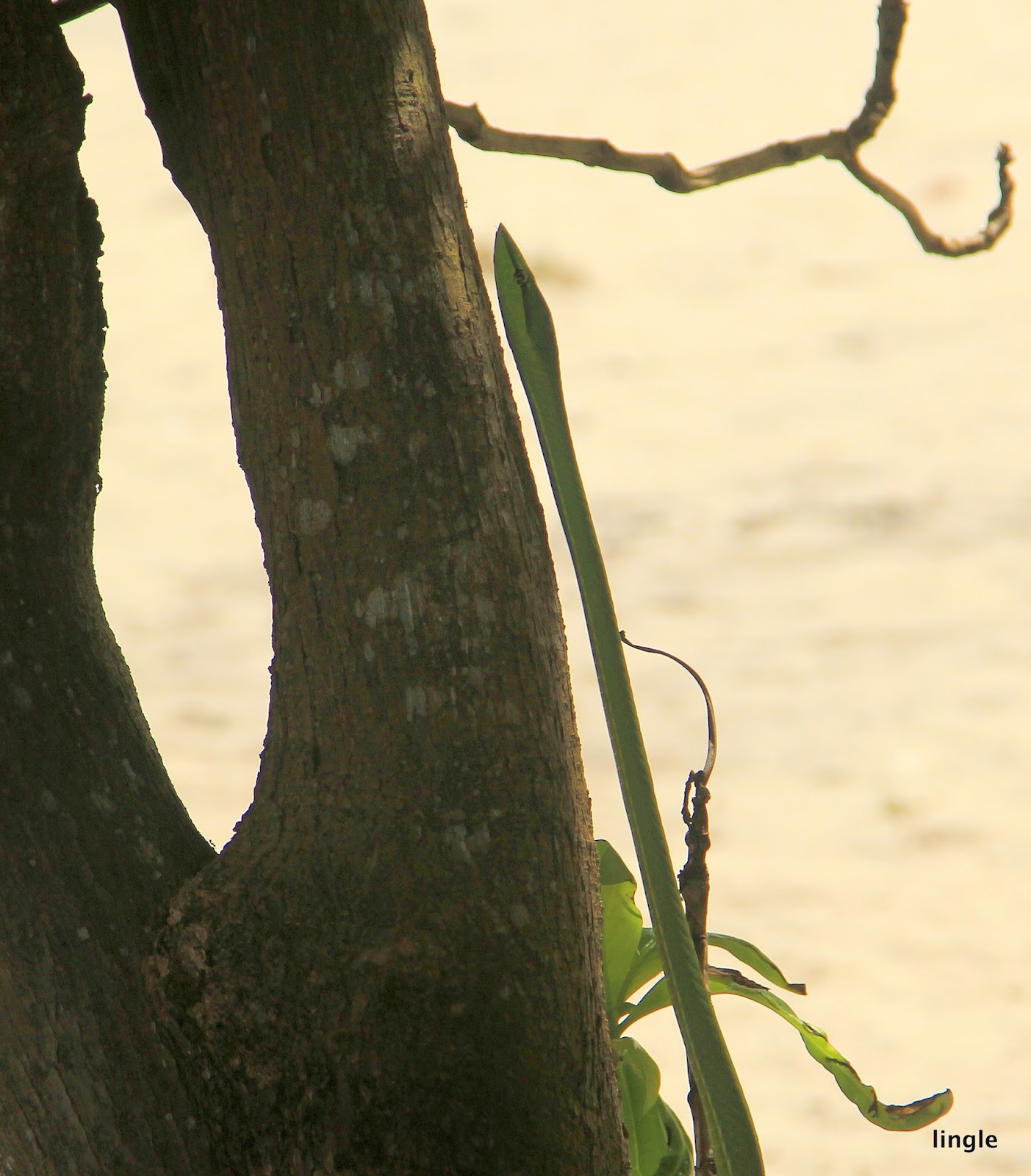 I took photos as quickly as I could, but the snake was quite at home in the tree and too soon was up in the leaves.  My last view of this beauty was this:
We have seen this snake before and I hope will see it again.  They spend most of their time in trees and after eating they retire to a tree top for little rest.  I like to imagine that this one is frequently looking down on us from the tropical almond tree in front of our cabana.

References:  Wikipedia and Venomous Snakes and Their Mimics of Panama and Costa Rica (Ray and Knight).
Posted by Wilma at 4:51 PM 12 comments:

A Roof to Keep Us Dry

I seem to have succumbed to Island Time with regard to my blogging frequency.  Not that we are on an island, but you couldn't tell it from our view. 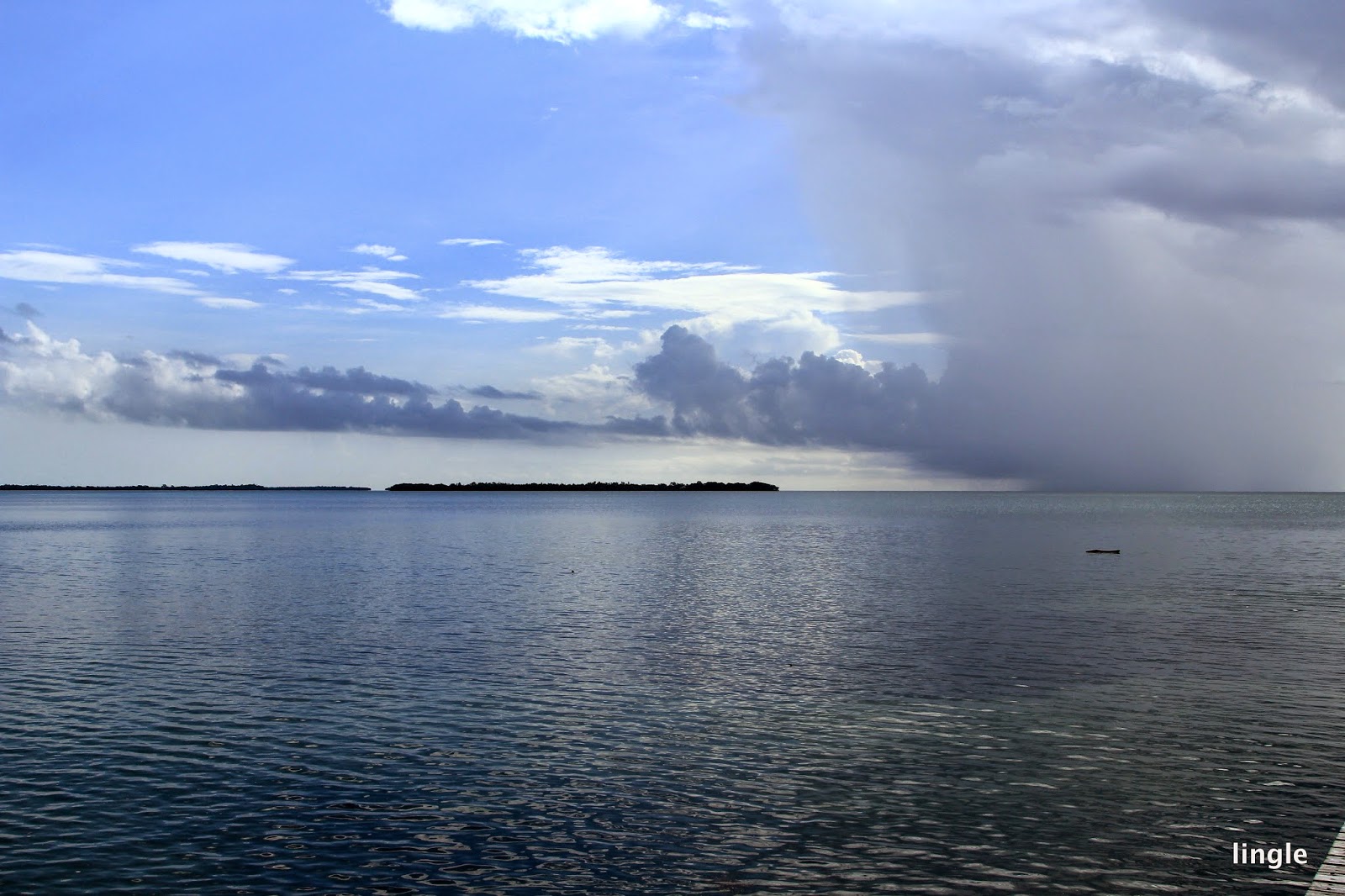 The increasing frequency of rain squalls are a sure sign that the rainy season is gearing up.  Our goal was to have our addition dried in before the rainy season, but we didn't quite make it.  The top photo below was taken Sept 25th. No roof, no windows, and 4.3 inches of rain in our rain gauge in the previous week.  It seems the rainy season was not aware of our timeline.  The bottom photo was taken today, 23 days and 20 inches of rain later than the top photo.  Now only 1 more door and 1 more window to install and then we will be totally dried in. Yea! 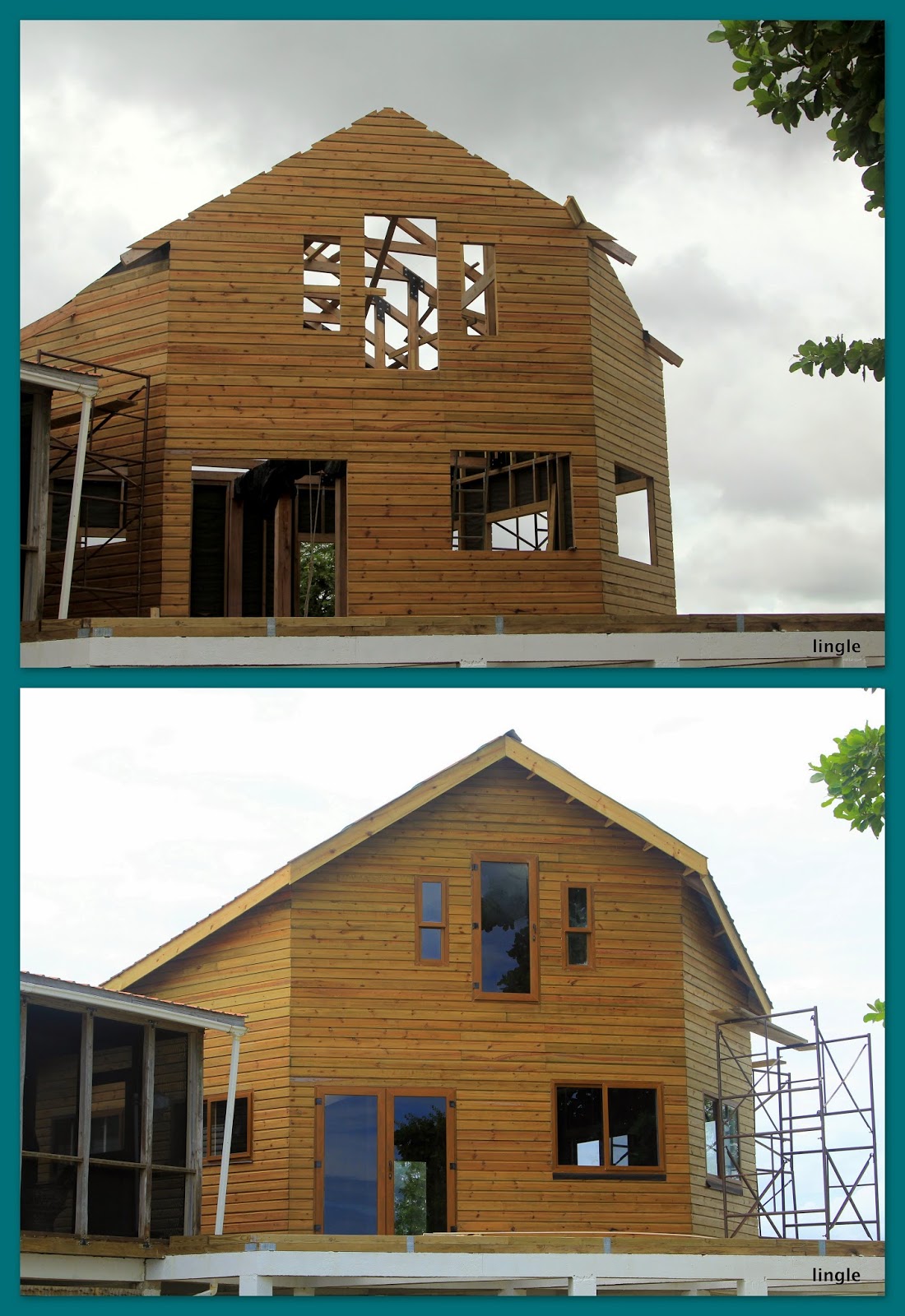 Another view of the sea. 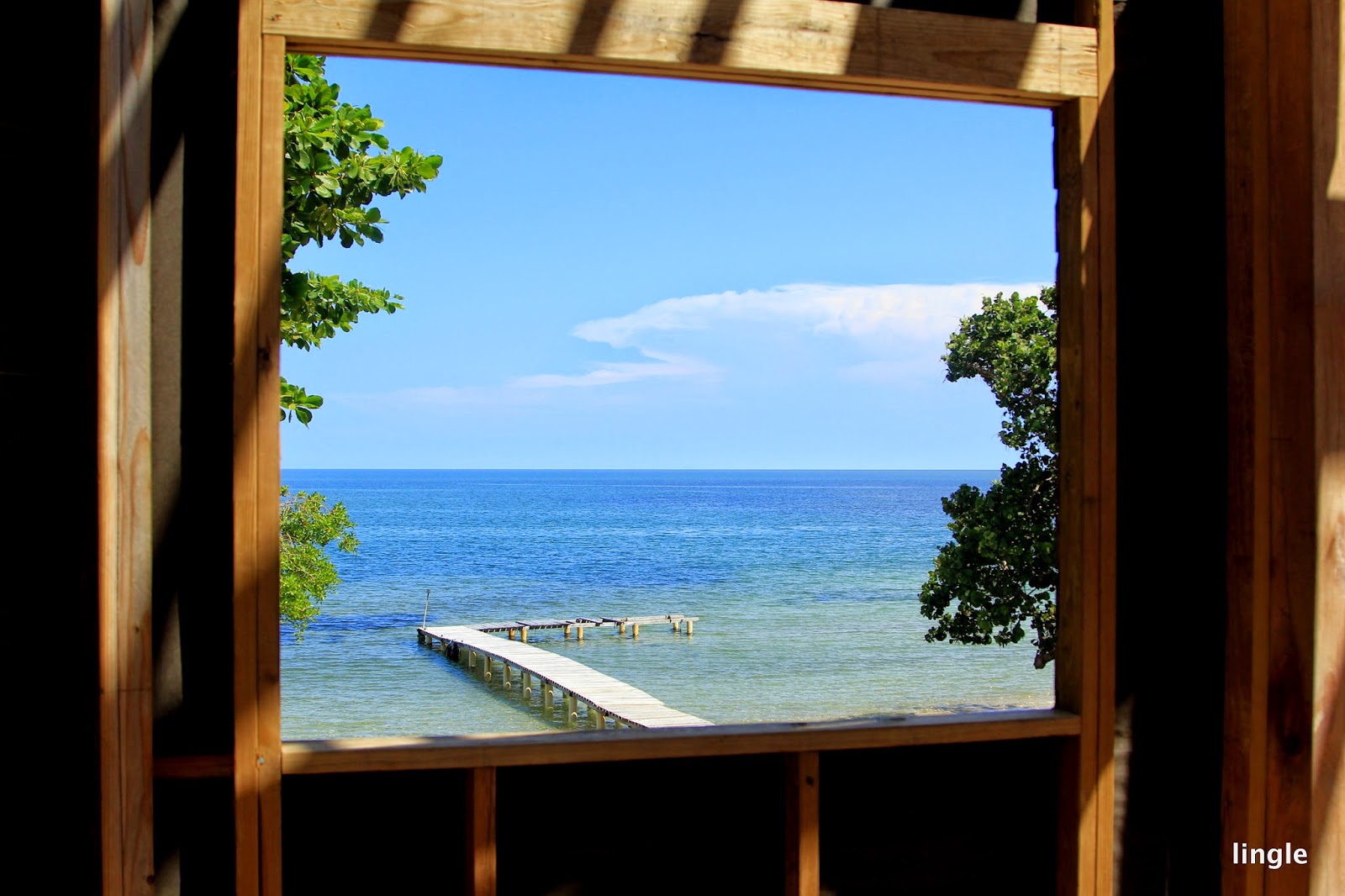 Here is what happened in those 23 days:
From the inside you can see the roofing trusses and upper level walls.
From below you can see the 2x4 wood straps to which the sheet metal (called "zinc" here) will be screwed.
Another view from below showing the crew securing the last 2 sheets of "zinc" on the north side of the roof.
We used mostly 10x4ft sheets of zinc along with some 8x4 sheets for the corners.  Oddly, the undersides were different colors.  Luckily, that won't show from the inside once we are finished.  However, it isn't uncommon around here for the zinc to be exposed, i.e., for the roof to be the ceiling.  We will be installing rigid insulation against the 2x4 straps and then some sort of finish over the insulation.  Not sure what yet, maybe tongue and groove mahogany paneling.  Suggestions are welcomed!
Before and after shots of the north side are below.
We had the windows and doors custom made in Spanish Lookout by Peters Glass Shop; we highly recommend them.  I am so happy with how they turned out.  We will be putting up the exterior trim around them next week.


The collage below shows the southwest corner and the south facing roof during the construction.  Either 18 or 20 solar panels will be mounted on the roof.  A small shed room will be added to the windowless wall to house the inverter and the batteries will run under the windows along the wall on the right.  The space the batteries will be in is on a breezeway that will be covered by a shed roof that links the old cabana with the new addition.  The breezeway will be screened in. 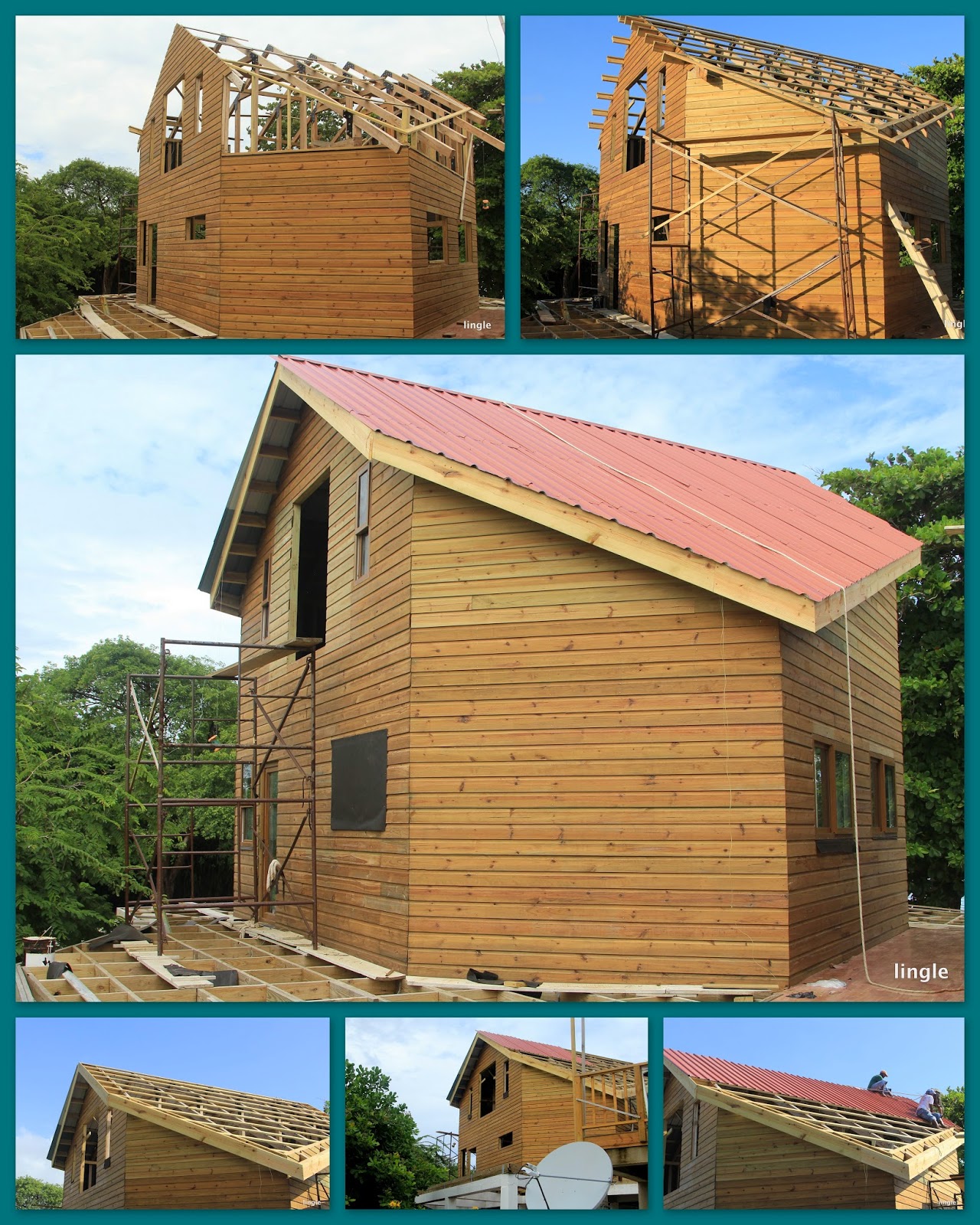 Once the roof was up, we took the tarps off the Santa Maria wooden beam.  You can see the beam and some of the posts in the collage below.  I had thought that putting the roof on would make the space seem smaller, but it doesn't.  The space is nice and open with plenty of light coming in through the windows.  I'm sure that will change a bit when we put the loft in, but with 10 foot ceilings under the loft, it should still feel open and airy. 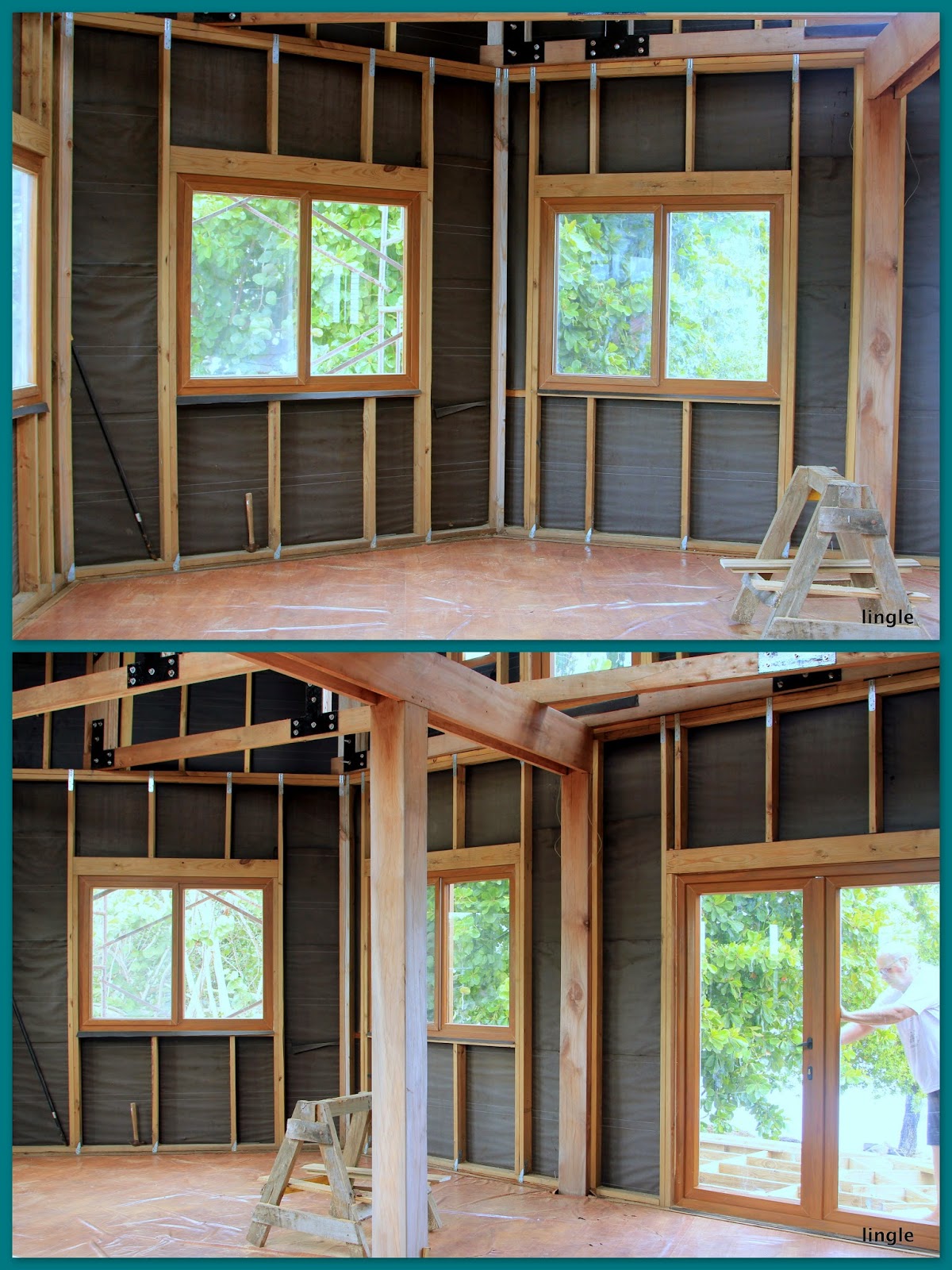 There is still an amazing and daunting amount of work yet to be done.  Getting the solar panels, inverter, and batteries up and running is our priority now.  The panels are being shipped, the batteries and inverter have been sourced and will be ordered next month.  Things are happening!