The Night Heron and The Green Iguana: A Dock-u-Drama

The images aren't the greatest, but the series is highly entertaining. Click here for musical accompaniment.

A juvenile night heron flew from the dock to the beach to check out a green iguana in the surf. 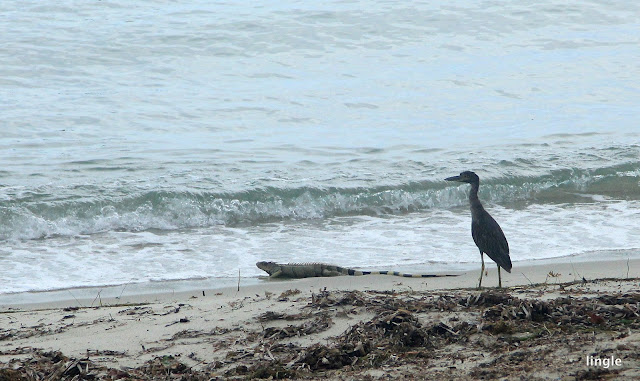 The heron was startled when the iguana started walking. 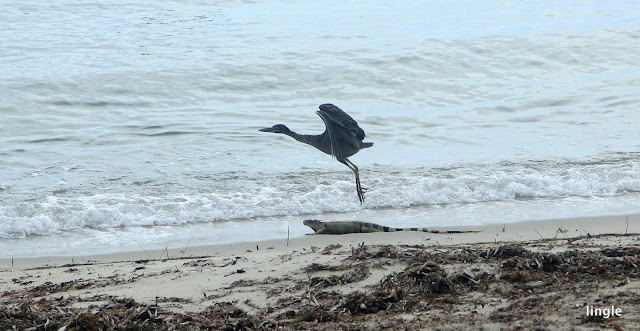 It flew over the iguana and

where it would be safe as it watched the iguana. 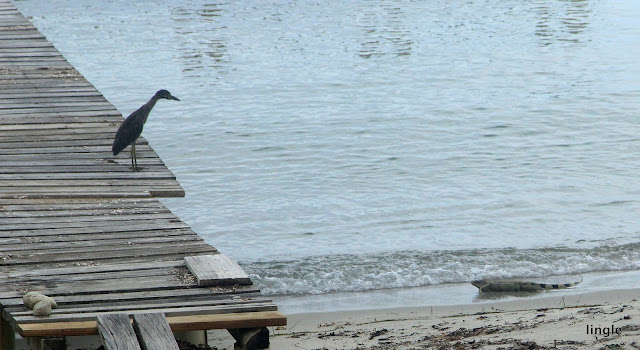 The iguana came closer and closer, 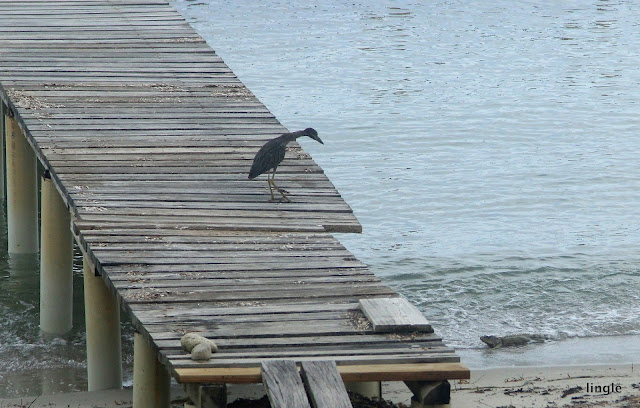 finally disappearing under the dock. 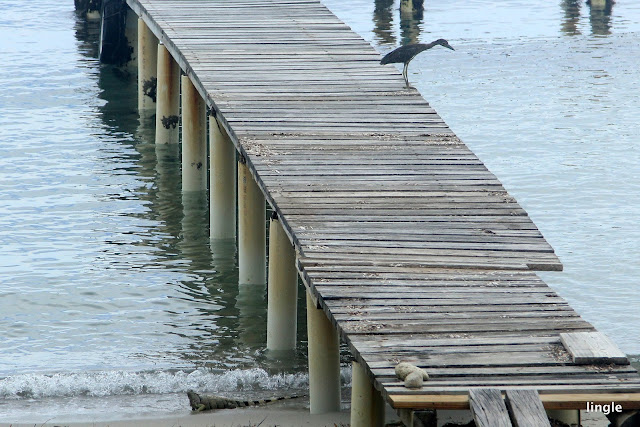 Unbeknownst to the heron, the iguana emerged on the other side of the dock 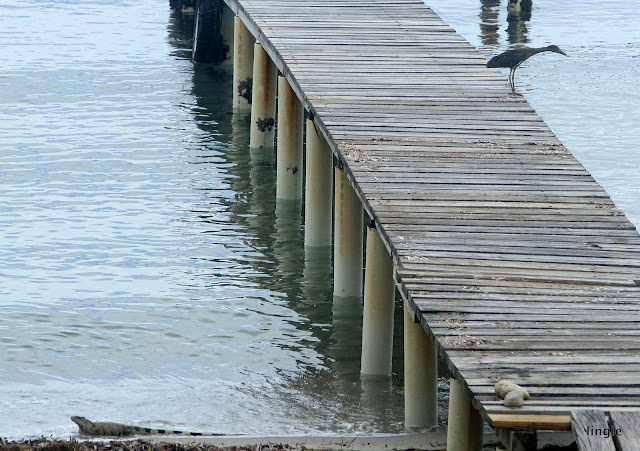 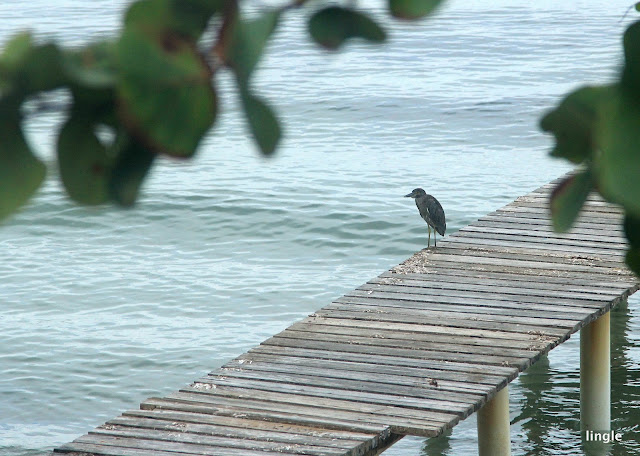 The heron still searches, knowing the iguana is out there somewhere.
Posted by Wilma at 12:38 PM 10 comments:

Email ThisBlogThis!Share to TwitterShare to FacebookShare to Pinterest
Labels: green iguana, I know you're out there somewhere, Juvenile night heron, Moody Blues

Up On The Roof

June has been a busy month for us.  Too bad our internet connection has been painfully slooooowwww or I would have blogged about what's been happening sooner.  It's still slow, but I can't wait any longer.  For now, I will go fix breakfast while these images are uploading.

One hour and ten minutes later ...

The first week of June brought us the first of the newly hatched iguanas from the nests on our property.  Not sure how many hatchings there were, but we saw at least 10 different individuals on our veranda.
We also commenced on the second phase of the solar power installation.  Queue up the appropriate music by clicking here.  We have 13 (12 and a spare) big batteries for the battery bank.  Each battery weighs 315 lbs!
These stairs are 4 ft wide to make it easier to get cumbersome items up.

At the top of the stairs we had a heavy duty dolly for the battery so we could roll it to the box.
The box is specially designed by Dennis so that it is a Faraday Cage to protect the batteries from lightning strikes and lined on the bottom with an acid resistant fabric to soak up battery acid should there be a spill.  Several other safety features are incorporated, too.  He'll share the details in an upcoming blog.
Bring 3 batteries up, one at a time, take a break, repeat ...
The ProSolar crew cabled up the batteries and tied them in to the charge controllers.  Then our crew put the front on the battery bank box.  The lids come next. 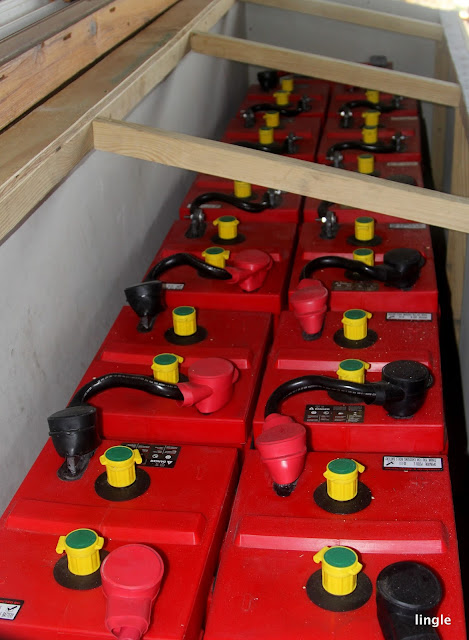 Meanwhile, up on the roof, the ProSolar crew mounts the 15 solar panels.
The output from the panels then goes to two charge controllers to charge up the battery bank (via the battery chargers in the inverter units).  DC output from the battery bank goes back to the inverters and then finally to the breaker box in the form of AC electricity.  All this (except the batteries themselves) takes place in the inverter room, which Dennis also designed with lots of safety features.
The solar panels are all on the south-facing roof of the new addition.  The pitch of the roof is such that the panels are angled directly toward the sun during the winter months.  This will help compensate for the shorter day length in winter. The angle of the sunlight is not optimal for summer, but the longer day length will offset that.  At least that is how we planned it, time will tell if it actually works out that way.  Theory vs actual.
Can't you just feel those photons being absorbed by the solar panels in the image below?  And a good feeling it is, too.
And I will leave you now with a view from the Sunset Balcony.  Goodnight photons.  See you tomorrow. 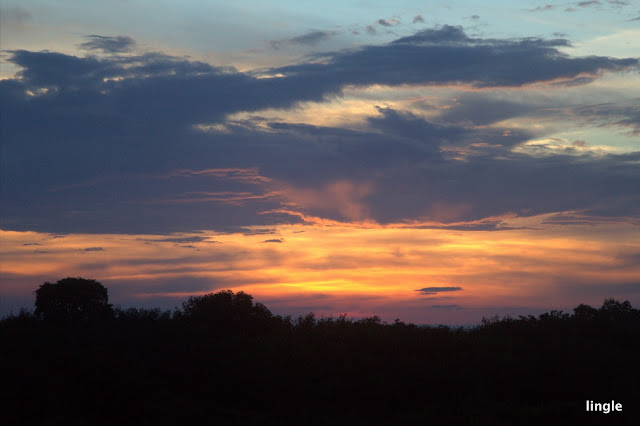