The drive to Chan Chich went quite well, but was very long.  The last 35 miles on dirt roads of varying quality took nearly 3 hours.  Here's the route from Google maps.

And here is what the last part actually looks like according to Google Earth.

I left home at 7AM.  Dawn on the beach was promising.   We left Placencia at 9AM with me driving Melanie's Kia.  We planned to reach Chan Chich before 2PM, just before the restaurant stopped serving lunch.  We made our first stop near Dangriga at a service station that has clean bathrooms.  I took this photo of the sign on inside of the bathroom stall.
I didn't take any photos along the newly engineered and resurfaced Hummingbird Highway.  It goes through the stunning Maya Mountains and is now a joy to travel on.  We missed the turn onto the dirt track and stopped for directions at a hardware store not too far from the Mennonite village of Spanish Lookout.  These Mennonites have embraced many aspects of machines and technology and have massive modern farms that supply Belize with all manner of vegetables, meat, poultry, dairy products.  The clerk I asked for directions to get to Yalbac Road was not able to help me, but he did suggest asking another customer in the store because "he should know".  So I did.  Mr. John Roberson, as it turns out, knew exactly how to get to Yalbac Road because he built most of the roads in the area!  He drew a map, gave me his phone number, and said to turn around, take the first major right on Farmers Express Road and then take the next left onto Roberson Road - his road.  Did we find the right person or what?!  Coincidentally, he and his wife were taking their visitors down to Monkey River Village the next day.  Belize is such a village, you will discover some link with anyone you speak to for more than 5 minutes.

Finally Yalbac Road, which went on forever!  We did not see another vehicle until we reached Chan Chich.
At some point we entered a reserve that is used by US and British military for jungle training.  We had to go through checkpoints and show that we had reservations for Chan Chich.The road become much hillier and a bit rougher, probably due to army vehicles.  We passed through Busby Camp, which is where the military folks stay while on training missions.

There were 3 or 4 very tricky spots of mud with steep ditches on either side.  I actually had to get out of the car to scope out the best way to get through without getting stuck or bottoming out the Kia., which fortunately is fairly high.
Not too far now . . .
And finally we're here.  Too late for lunch, but we were greeted with deliciously cold allspice tea and promises for an early dinner.

We averaged 25 miles an hour overall, much slower through the jungle.  Good thing I like to drive.  Silly us to trust Google Maps to account for dirt roads when calculating driving times!  In the end, it was worth it.
Posted by Wilma at 4:49 PM 8 comments:

The wifi is making me crazy,   just something quick for now. First is a heliconia flower.  Next is an ocelated turkey.  And finally an overgrown, unexcavated part of a Mayan ruin.  Except blogger on my phone put the ruin first and I can't change it.  Oh well. 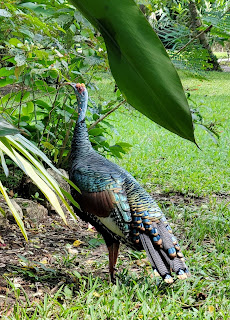 Morning by the, evening in the highlands

Posting this from my phone.  My friend Melanie and I are on  a mini holiday at Chan Chich Lodge, a 5 hour drive from Placencia.   Will write more in a few days.

Pecaries above and our veranda below.

This project took me 15 minutes to complete, and 10 of those minutes were spent finding the hooks.  (It took far longer to write this post than to complete the project.). I had noticed that the dominant rufous tailed hummingbird at one of the feeders would try to perch on the 2x2 inch support for the window awning.  It kept sliding off the smooth, slanted surface.  I thought a slim dowel held in place with 2 screw-in hooks might be the answer, and so it was.


I took a couple of videos through the screen of the window so you could see and hear the hummingbird using the perch.  Turn the sound up to hear the fussing!

I used to worry that this hummer was chasing all the others away before they could feed.  But then I noticed that while one hummer distracted it, others would fly in to feed.  I wonder if they draw straws for distractor duty?
Posted by Wilma at 2:34 PM 10 comments:

The Two Birds, One Stone Solution

We always have some sort of project going on here - to keep us out of trouble, you know.  Here is our "Two Birds, One Stone Solution Project"!  This project started with the aim of minimizing the accumulation of afternoon heat along the west side of the original cabana (bird #1).  Over the years we have made several attempts to do this, with limited success.  The addition of a partial veranda roof to provide shade helps quite a bit, but is not sufficient and sometimes it seems to act like an oven, trapping heat under the roof.  Planting a replacement tree for the big old fig tree that fell down after Hurricane Earl sideswiped us with tropical force winds in 2016 was a great idea that will yield some relief in about 10 more years; the coral bean tree we planted in 2017 is still pretty short! The shade curtain that we hung along the edge of the veranda roof seemed to have helped a bit and yet at times contributed to the oven-effect.  We needed a new plan.  Dennis found a very tough screening material that filters out something like 90% of UV light.  We got a huge roll of 7 foot wide material in white to use in a new design.

Rather than have it hang straight down like the shade curtain we are replacing, we incorporated the rolling planters (that we have never used to great advantage) as a wall over which to drape and secure the screening material. farther away from the wall of the cabana.  The planters had been located on the sunset balcony (located just under the satellite dish in the photo below) and were very much out of sight, out of mind. 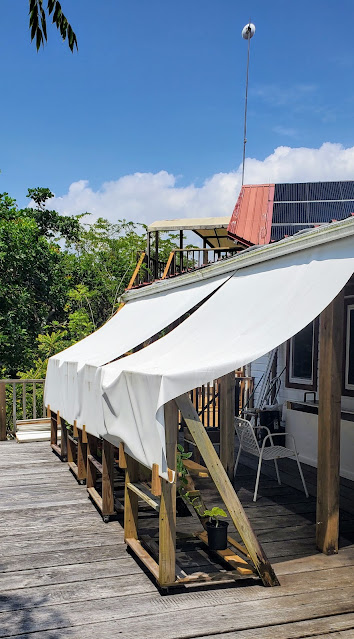 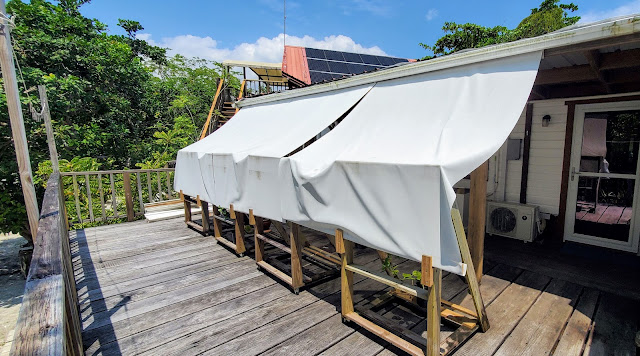 The advantage to using the rolling planters rather than installing a permanent support is that these can be moved up against the house and the screening taken down if a hurricane comes our way.
We still have plenty of room on the 17 ft wide veranda to use the clothes line and to access the back door and the shed door.  And underneath the roof there is plenty of room to get to the battery bank and have space to tend the plants.A major drawback of the former shade cloth curtain that hung straight down from the edge of the roof was that it limited the natural airflow.  This design doesn't hinder the breeze as much, yet keeps the direct sun out.
The fine mesh of the screen creates an amazing mist when it rains!  The plants love it, which brings us to bird #2 - growing space for tender plants.
I have big plans for the planters.  I am going to re-install the sections of rain gutter as containers for micro-greens and small herbs and create supports for the climbing Malabar spinach.  Pots of other assorted kitchen herbs will find a home there - in fact the Cuban thyme is already there and thriving.  This will be the perfect place  to start seedlings for things destined to be planted in the raised beds or directly in the ground like the palms and provision trees.  This time (I promise!) I will tend the rain gutter planters more faithfully.

My brother and I were visiting the Dallas World Aquarium back in May.  Here is more of what we saw.

Flamingos!  The flamingos get to look down on the people tube that runs through the big aquarium.  I don't think they paid a bit of attention to any of the people.  They did their best to ignore us, going so far as to put their heads under their wings.

Toucans and Aricaris!  The keel-billed toucan is the national bird of Belize.  Always a treat to see them. 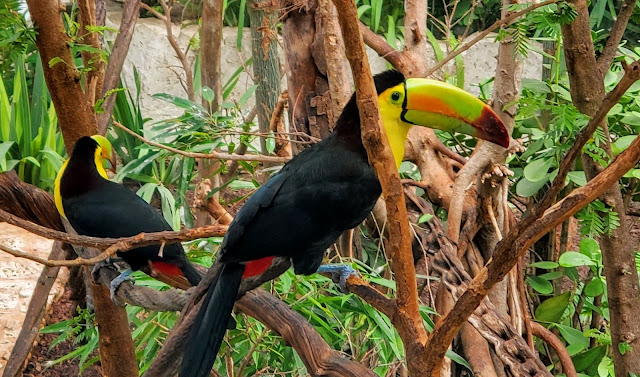 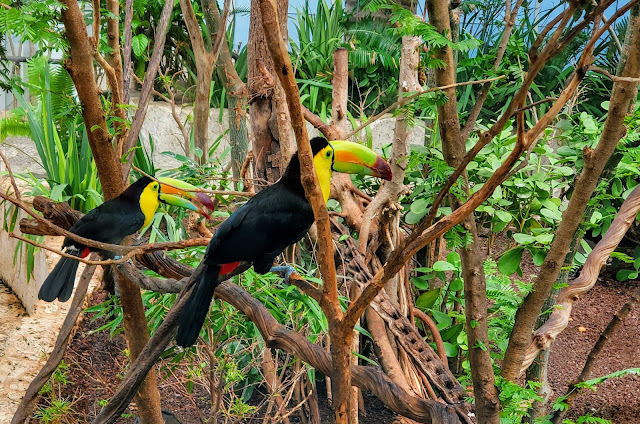 Belize is also home to several aricari species, but I don't know if these particular aricaris are found in Belize.  For sure their cousins are! 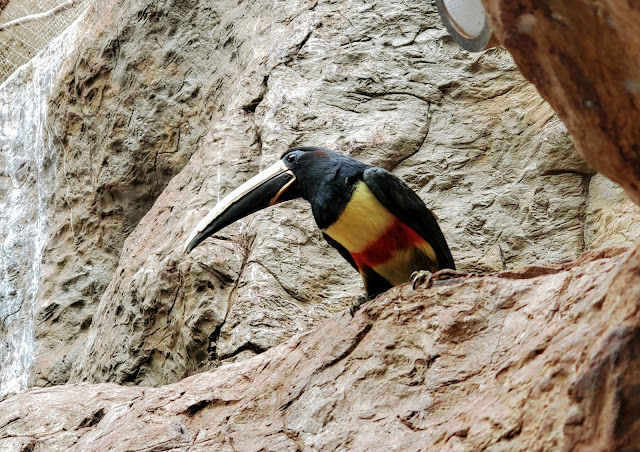 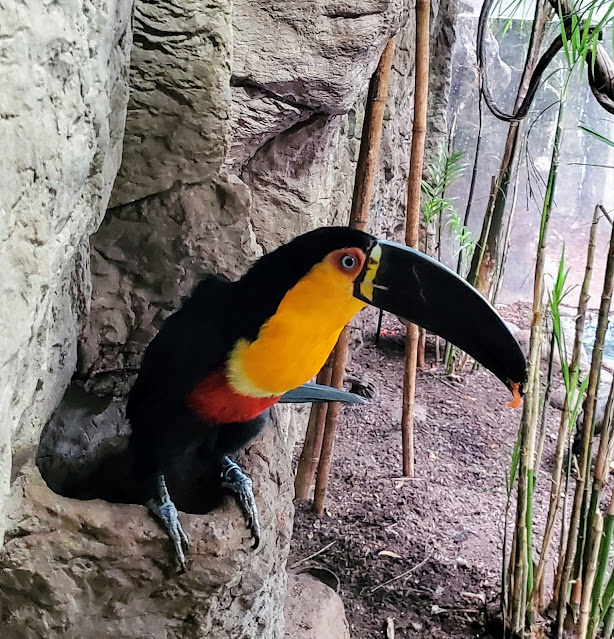 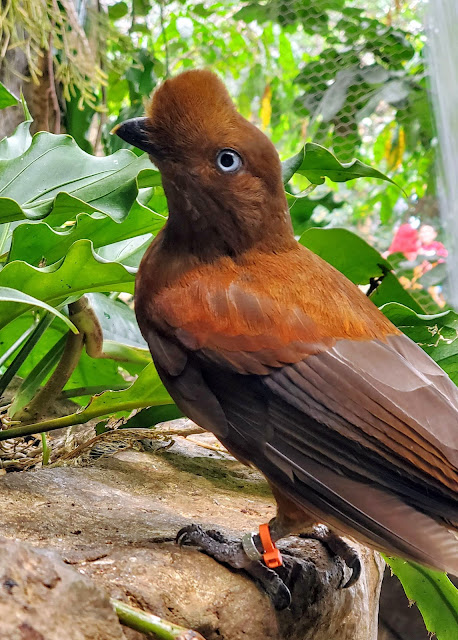 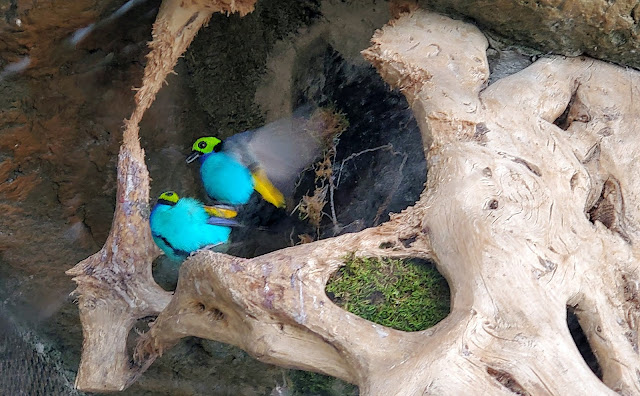 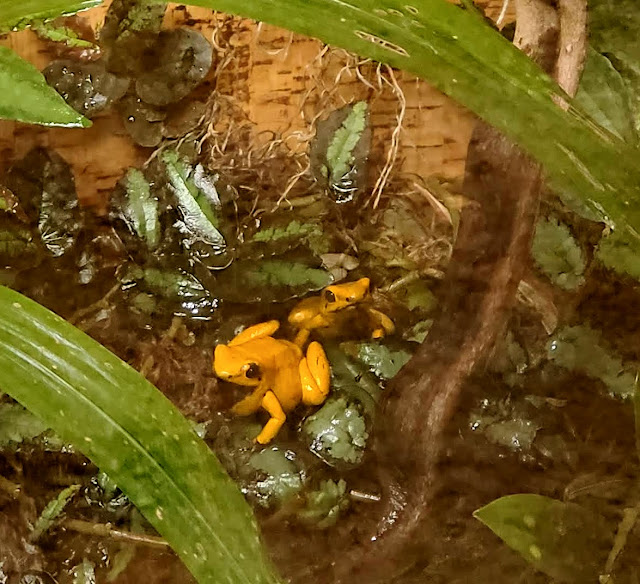 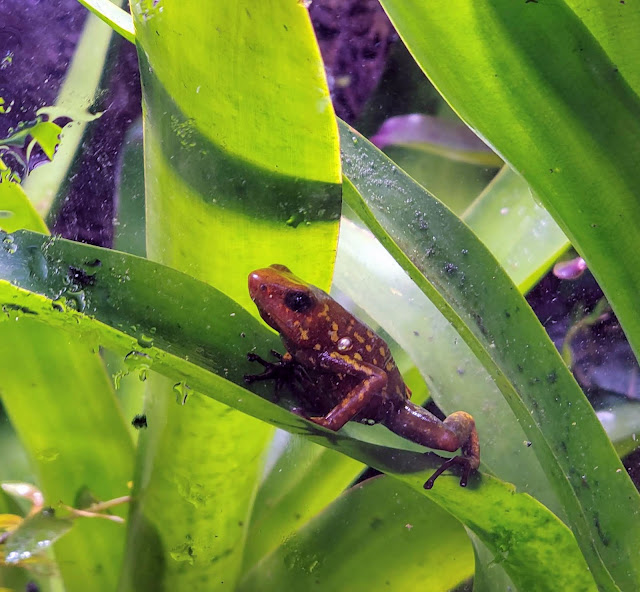 There were many other animals and gorgeous plants.  I don't like to see large cats and primates held captive, so I don't have photos of them.  The cats, held singly (probably a good idea), were pacing with boredom in areas far too small.  They really need to be in the wild.  The smaller lemurs seemed OK, but the larger lemurs and monkeys probably need more stimulation and larger habitats.  Otherwise, I enjoyed the zoo and highly recommend it.
Posted by Wilma at 1:14 PM 8 comments: