More Views From a Kayak

A flock of Great Egrets overhead is always a good start to a day.

In a nutshell there are 3 large white egrets/herons in Belize.  They can be identified on the basis of leg and foot color.  Great White Herons have yellow legs and yellow feet, just like their blue morphs do.  Snowy Egrets have black legs with golden slippers and Great Egrets have black legs and black feet.  There are other, smaller, white egrets around like Cattle Egrets and juvenile Little Blue Herons, but the size difference helps discriminates between them.

This day, I kayaked by myself into the marshes and explored a shrimp farm drainage canal.

While in the marsh and the canal, I did not hear a single human-made sound other than what I was making.  It was so serene and almost other-worldly; one could forget the existence of civilization (almost - except where did that high-tech camera, cell phone, and even plastic kayak come from? hmmm?).  As I got back to the open sea, I began to hear the occasional boat motor and I prepared to re-enter what we call the real world.  But I think the real world was what I left behind in the marsh ...

Dawn came with a silky stillness in the primordial air. 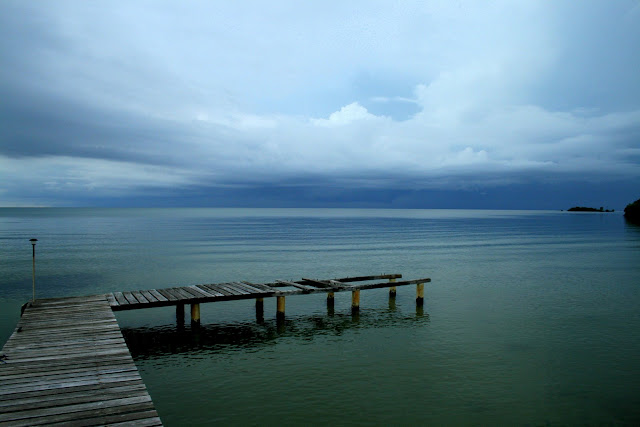 Gentle undulations rock the sea like a faint heartbeat, punctuated by the silent passage of egrets skimming the surface. 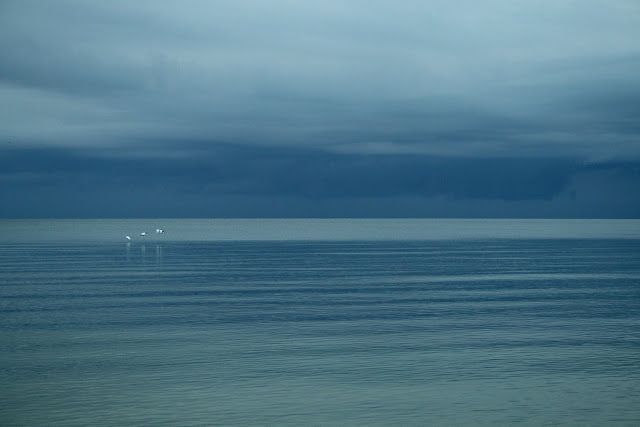 To the north, the sky clears as dawn breaks free of the low clouds and day begins in earnest. 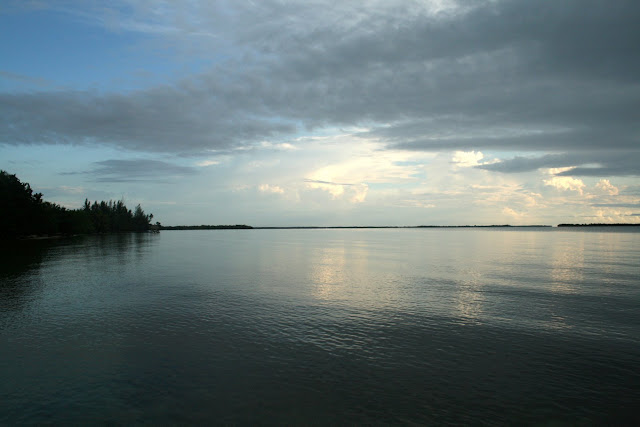 A day made for kayaking, slipping soundlessly along the water's surface, at one with the natural world.  Dennis and I head toward the sunlight in the north, easing in and out of passages amongst the mangroves. 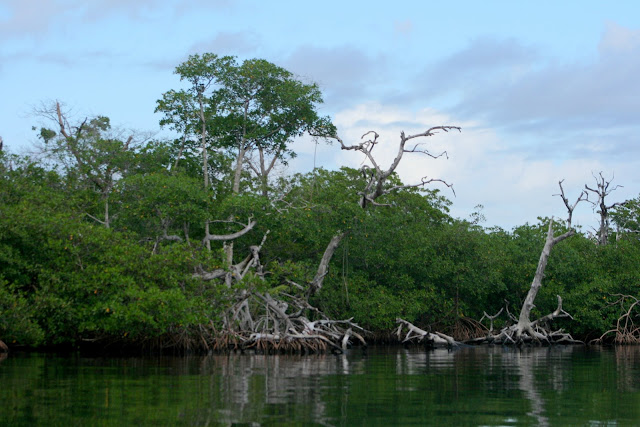 We glide up to herons, like this yellow-crowned night heron.
Way back in the marsh we saw a flash of peacock blues and greens.  What on earth?  It flew into the heavy mangrove tangle and walked from root to root, always keeping on the far side of vegetation, giving us only glimpses of a bird with a heron-like neck and bill but with a bulky, turkey-like, body.  It cautiously peeked out at us, seemingly as curious about us as we were about it. I got a couple of shots in hopes of being able to key it out later.  I succeeded in capturing the world's worst photos of the world's most beautiful bird - the Agami Heron.  Click here for the world's best photos of this fabulous bird.
Better luck in photographing a juvenile green heron.

We'll be back for more of that Agami heron and perhaps to see the green heron mature.

The day dawned with a pink and grey softness.


It is almost too beautiful to leave, even for a day trip. But there is an auction calling us, so off we go with Sue and Chris on an adventure in Mennonite country near the inland village of Armenia.  Sue had seen ads for an estate auction; everything, including livestock, household goods, and farm implements were on the block.  How could we resist?
Close to a hundred folks showed up for the auction, and with the exception of 4 (you know who those 4 are), all were Mennonites.  The Mennonites were very welcoming to us and explained the auction process.  This particular event was to sell off all the worldly goods of a recently deceased elderly couple whose decendents had their own households.  The auction was to turn the assets into cash which could then be easily split between the decendents.  Dennis and I had quick look around and then left Sue and Chris at the auction while we went to the town of Belmopan, which is actually the capitol of Belize, to pay our land taxes, an adventure in itself.  When we returned to pick up Sue and Chris, they had not bought anything, but enjoyed watching the bidding.  Apparently the woman of the house was well-known for her canning abilities; her canned vegetables and fruit (even canned pineapple!) were all sold at high prices.

The mountainous countryside is beautiful with pastoral scenes check-by-jowl with wild jungle.  All in all, it was a fine day in spite of the drizzly greyness.

The weather was so incredibly wonderful when we were in Belize back in October.  The seas were mirror flat almost all day long every day we were there; perfect for kayaking.  I spent at least 30 hours kayaking, most of it by myself, although Sue and I had a nice morning out one day.  We set out from Chris and Sue's place in central Englishtown, since they had the kayaks.  We had started to head north along the coast, but soon decided to head east over to Great Monkey Cay (pronounced "key").  I took my snorkel gear and was able to get in a little snorkeling while Sue relaxed in the sunshine and recaptured my kayak when it drifted off.  ;-)   The water was flat enough to take a route to the outside of Great Monkey Cay and loop around to the south to visit Little Monkey Cay.  Little Monkey Cay is a rookery for assorted egrets, pelicans, and frigate birds that settle down there every evening.  Throughout the day you can find bird activity there.  Little Monkey Cay was almost demolished by Hurricane Iris in 2001.  It has slowly been coming back, although it is still nowhere close to its former glory.
The map below shows the routes of the trips that I took.  The three thumbtacks mark the three households in Englishtown with full-time residents.  Note that the map is oriented with north to the right so that I could get more coastline in the image.  Great Monkey Cay is at the bottom in the center and Little Monkey Cay it to the left.  The route that Sue and I took is in red.  Right above little Monkey Cay is the entrance to Black Creek which runs behind our place marked with the leftmost thumbtack.  That kayak route (yellow) is a good one when the open sea is too rough for a  little kayak.

Two other kayak routes I took followed little creeks or dredged canals back into the marshes.  I spent hours nosing along in these little creeks.  Incredible birds, wonderful plants; never saw another person - my idea of heaven.

We flew into the international airport in Belize City and from there caught a little puddle-jumper prop plane to head south to our place.  With the exception of the last few shots, all were taken out the window of the little plane.  Most of the time the plane is flying at an altitude shared with vultures and frigate birds.