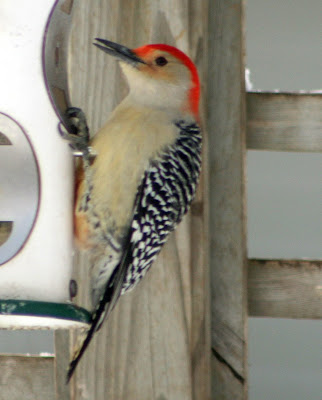 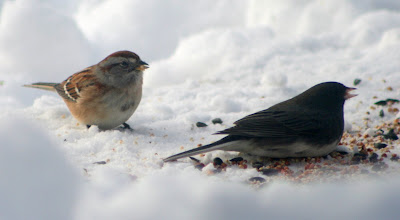 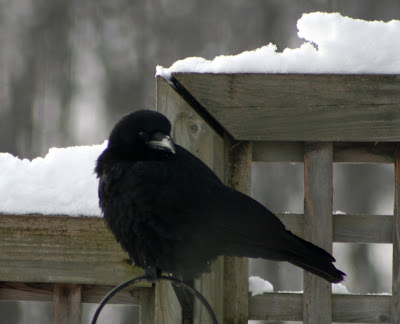 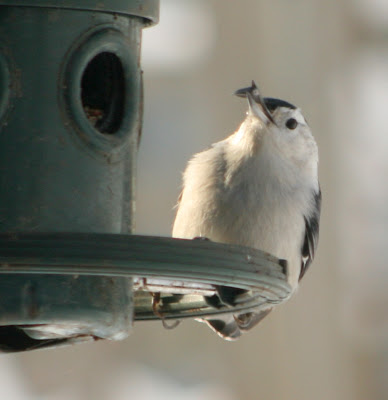 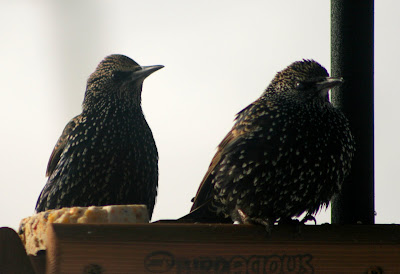 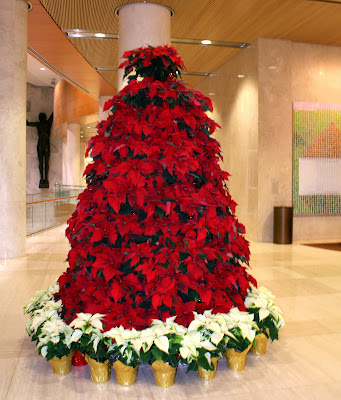 Crows in the Snow

Very busy at work, several looming deadlines are keeping me from posting.  I hope to get back to it shortly.  I still have a number of Belize Birds lined up to write about. 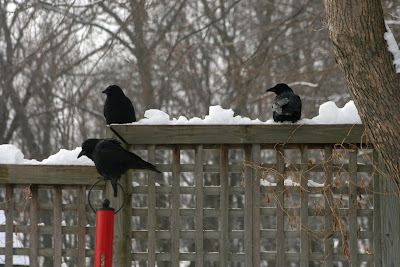 ﻿Back on October 25th  I posted some dragonfly photos and asked for help with IDs.  Doug Taron of Gossamer Tapestry kindly used his expertise to ID some of them as tropical dashers and a great pondhawk.  Thanks, Doug!
After that post, I continued to take photos of the incredible dragonfly activity and got a little more experience in sneaking up on them.  Below are some of the later photos.
Additional ones can be seen in my Belize Dragons 2010 Picasa Album. I am hoping for more help from Doug. ;-)


These appealing little warblers both winter in Central and South America after breeding in North America. I have never had the pleasure of seeing either of them in North America, but I will sure be on the look out for them. The yellow-throated warbler is found mostly in the southeastern US while the black and white warbler is found throughout most of the US and into Canada.

The black and white warbler was a little shy when we sw it in the jungle near our casita at DuPlooy’s Lodge; I got only a couple of pictures. 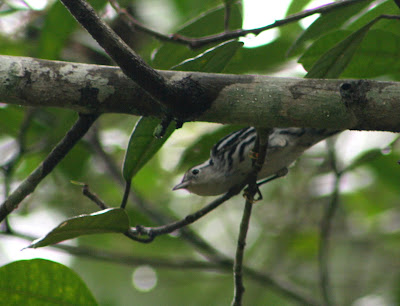 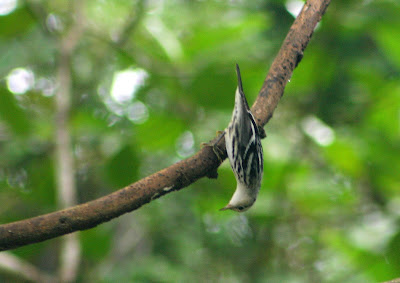 The yellow throated warblers were a little more visible and I took these photos of one foraging on the door to the generator shed at our place in South Englishtown. 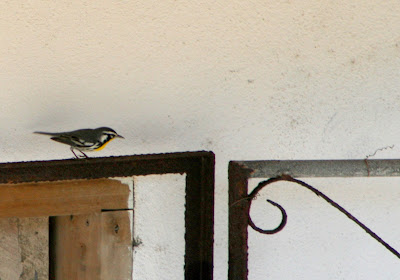 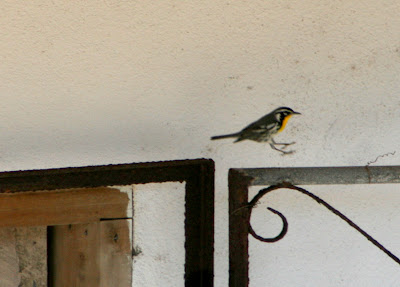 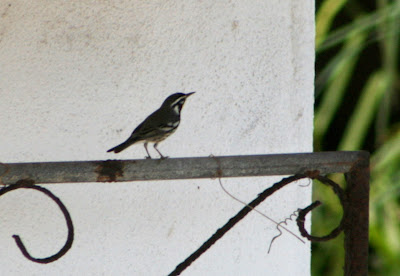 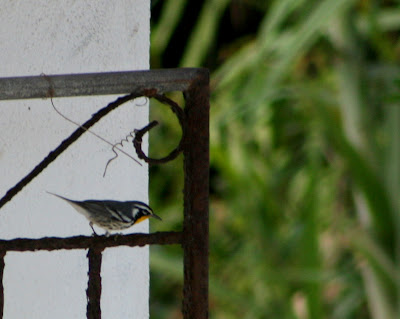 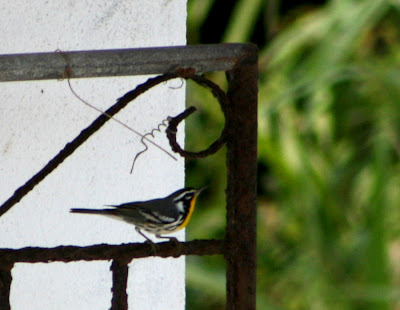 So this is very, very cool -- I am posting this using wifi onboard a Delta airlines flight from San Jose California back to Minnesota.  There has been some frustration with losing connection frequently, but not too bad.  I will probably come back and make some edits later because my laptop is almost out of juice.  My first post while airborn!
Posted by Wilma at 5:21 PM 6 comments:

The sea grape trees we can see so well from our veranda always seem to be a magnet for bird activity and this past October was no exception. This time of year, however, the birds are attracted to the insects that in turn are attracted to the sea grape flowers. The acrobatics of the Eastern Kingbirds were a joy to watch as they hawked insects in the sea grapes trees. The views were often obscured by the large leaves, but I did get a few shots of the activity.  Below is a series showing some of the moves.  Keep an eye on the bird in the background, too. 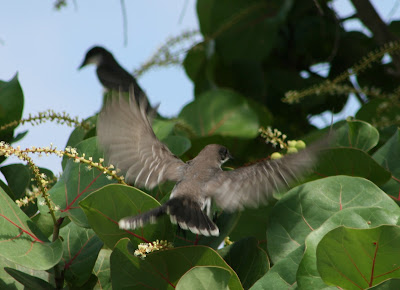 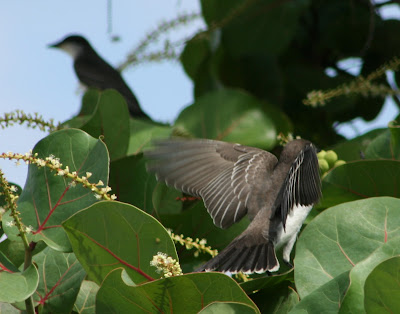 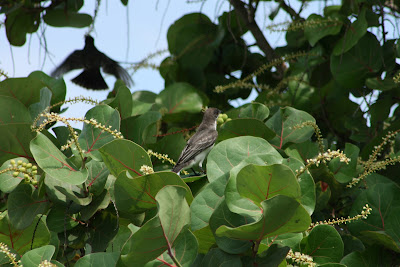 Kingbirds aren’t flashy, colorful birds; they are essentially monochromatic with white below, dark grey to black above. White wing bars and a white terminal tail band are about as fancy as they get. Though they aren’t colorful, they are handsome birds.

They reportedly do have smallish crests that show a little red or orange, especially the males, but none of them displayed crests during the hours of time we spent watching them. That may be because they are just passing through on their way from their breeding grounds in North America to their long winter vacation in South America. Their scientific name (Tyrannus tyrannus) denotes their fierce, aggressive behavior that is conspicuous during breeding and rearing. They tend to be isolated as mating pairs; and some pairs are lucky enough to have a helper. Other than that, they don’t tolerate others of the same species or even other species. 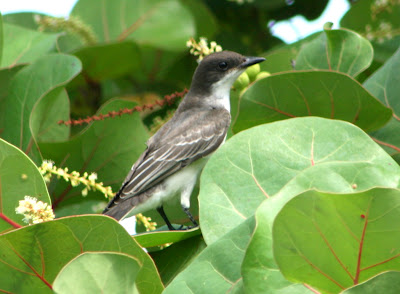 When they are migrating they don’t have to attract mates or defend territory and once they arrive in South America they tend to travel and forage in flocks. Another difference in their holiday behavior is that their diet switches from primarily insects to fruit. Just like people, they seem to have a more relaxed, gregarious take on life when on holiday and go for the sweets instead of the protein. :-)
Posted by Wilma at 7:37 PM 8 comments:

As shown below, my first views of the American Redstart were the classic “bird from behind” perspective.
﻿
﻿ But for the American Redstart, that BFB view is the best way to ID it as it forages for insects.  It leans its head down, puts up its spread tail, and waggles it – all in the space a second or two.
﻿
﻿﻿
﻿﻿
﻿﻿﻿
﻿﻿This little warbler that winters in Central America after breeding in feeds on the ground and in low underbrush.  It is so much fun to watch as it prances and dances with quite a shake of its tail feathers.  Knowing full well where you are, it often works it way very close you, especially if you don’t make sudden moves to startle it.

You may have read about Hurricane Richard hitting Belize while we were there last month.  Our place in the sourthern part of Belize escaped Richard's wrath, but the northern part of Belize was not so fortunate.  The Belize Zoo was hit especially hard.  To those of you  who usually give me a Christmas present, please donate to the zoo instead.  You can do it on a link on the blog site above.

A little over a year ago, we went on a night tour of the zoo that was wonderful.  You can see my blog account of the visit here.  The Zoo is (was) one of those very special places and I admit I cried when I saw the photos of the devastation.  Dennis and I are giving what we can to help; it would be such a loss to Belize and to the world if this little gem of a zoo doesn't recover.
Posted by Wilma at 10:13 PM 7 comments:

The English House Sparrows think so.


So do the grey squirrels.
the house finches and the goldfinches

and the cardinals.
Even the American crows agree that it is a cold, wet day.
But what did we expect, it is November after all.
Posted by Wilma at 9:31 PM 3 comments: