We were given 4 lobster heads and decided to make a stew with what we had on hand.
Boil up the heads of 4 just-caught lobsters in a big pot of slightly salted water (water to cover the lobster heads and ½ TBS salt). Sauté 2 chopped onions, 1 chopped green pepper, 6 cloves garlic, slivered carrot, chopped cho-cho (aka chayote), 3 diced potatoes (skin on), By this time the lobster has cooked enough, so take it out of the water and allow it to cool. Let the lobster-water continue to boil gently to reduce in volume. Add part of the water to the sautéed vegetables and let it cook down. Once the potatoes are soft, mash them and the other vegetables so that there are still identifiable chunks, which give some texture to the soup. Meanwhile, pick the lobster meat out of the heads. Combine all the reduced lobster stock to the mashed vegetables. This yields about 2 quarts. Take one quart and stir in 1 packet of dried coconut milk. Bring back to a boil, add the picked lobster meat and serve immediately with a sprinkle of chopped culantro (similar in taste to cilantro, but a totally different plant) and a dash of Marie Sharp’s hot sauce. Perfectly complemented by a glass (or two) of crisp white wine.
Save the reserved additional quart of lobster stock with veggies for the meat from heads on the 4 lobsters that cost $50BZ ($25US). Tails to be grilled separately after marinating in lime juice overnight.
Homemade Yogurt

Long ago, in his college days, Dennis had made yogurt from powdered milk. We thought it would be good to try that in Belize, especially since it is easy to keep powdered milk on hand.   We bought a canister of powdered milk once we arrived. Step one is to mix up the powdered milk half again as strong as the directions and then carefully bring it just to boiling. Sounds easy, right? The mixing instructions on the powdered milk are in Spanish and neither of us speak Spanish. What we could decipher was that the whole container should make 9 liters of normal strength milk. So we measured the volume of the powder, divided by 9 to get how much makes 1 liter and then multiplied that by 1.5 to get the strength we needed for the yogurt. Now we are ready to start. Whisk the powder into the water in the pot, bring it just to a boil, and let cool to 110 F before adding the purchased yogurt starter. Pretty simple, really, especially since Dennis had brought some cooking thermometers down with us. Once the yogurt starter is mixed in, you transfer the mixture to your yogurt container (in our case a clean, used container of store bought yogurt we also brought down with us), and put that container in a larger of warm water to incubate it at around 90-100F until the yogurts sets. It set in about 7 hours. The taste was wonderful. Once you get a batch going, you can use a couple of tablespoons of the old yogurt instead of yogurt starter to make new yogurt. I like it sweetened with Belizean honey and served with fresh fruit mixed in, as shown below, or in savory dishes such as poached snapper and vegetables. 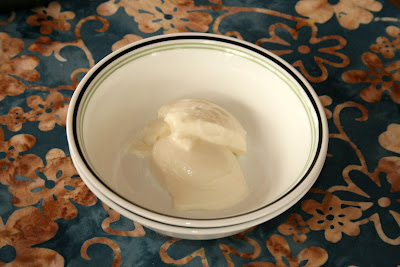 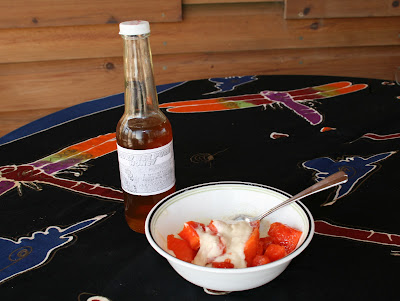 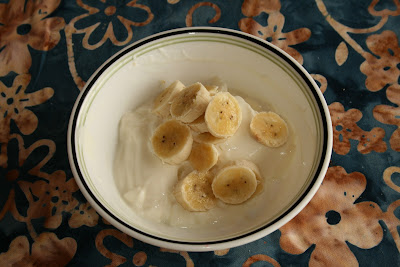 We also made a thicker, Greek-style yogurt by straining some of the whey out. Notice the high tech rig we made to suspend the bag of yogurt over the pot to collect the whey. Yes, that is a wooden spoon stuck between the drawer and cupboard door. ;-) 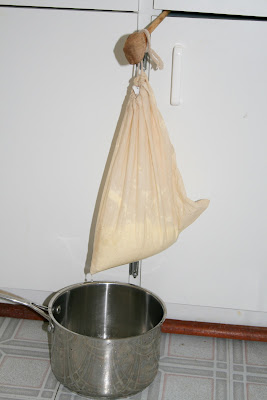