The Past Won't Stay Buried 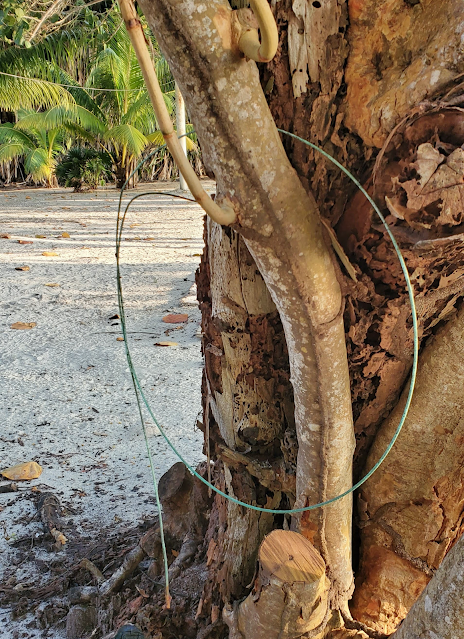 It is the remnants of a phone line that used to connect coastal towns and villages to the seat of colonial government in Belize City.  The phone line was critical because roads for motorized vehicles did not exist in the southern part of the country. Transportation was mostly by sea, river, and canal.  Sections of this wire keep re-emerging from the ground as the sands shift, the wind blows, rains fall.  It used to run from north of Pine Ridge Creek all the way to the Monkey River Village before the road was put in.  Poles supported it above the swamp and across the creeks and rivers.  Apparently, the village had a "village" phone, as did most villages in what was then British Honduras.  A Belizean friend of ours has childhood memories of cranking the handle on the phone line a particular number of times depending on which village you wanted to reach!   When we were making arrangements to come down to stay in Monkey River Village the first time in 1999, we rang up the village phone to make our reservations at the Monkey House.  But surely, by then it was the a new line that followed the Monkey River Road, which took a more inland route to the village than the old phone line did.   Good thing it was the new line we called on because that would have been a lot of cranking to reach the village all the way from Minnesota!  Eventually the old phone line was abandoned, but not removed.  Poles rotted and collapsed, or were blown over in hurricanes, leaving behind sections of intact phone wire, covered over by sand and detritus, all along the Englishtown shoreline and even back across Pine Ridge Creek.
Below is a copy of an excerpt from an official publication of government budgetary proceedings when Belize was still the British Colony called British Honduras.  I can't put my hands on the original source at the moment, but my recollection is that it is from the 1940s.

In that excerpt "Belize" refers to Belize City, which was the capital at the time, and Stann Creek refers to the town of Dangriga, which is located between Monkey River and Belize City.  Punta Gorda is the still the largest (indeed, the only) town south of Monkey River.  In 1950s and 60s, Monkey River Town was a bustling place, much larger than today.  Large banana and citrus plantations were the primary enterprise.  Toward the end of the 1960s both industries collapsed due to plant diseases.  That marked a rapid decline in the population of Monkey River, demoting it in status  from Town to Village.  Now the primary enterprises are tourism and fishing.  At the same time, the "suburb" of Englishtown became a place for weekends and summers, with no year round population in residence.
Also interesting is use of the word "wireless communication" in the excerpt, referring to the original radio "wireless".  These days, wireless is the primary means of communication not only in Belize, but worldwide.  Just last month, one of the two Belizean telecommunication providers installed a new tower in the village so that residents can more easily get good wireless internet and phone service.  That is a real boon to the villagers, especially the children who are still relying on remote learning part of the time.  We are back to wireless, and this time it's a good thing.