It is an Ill Wind That Blows No Good

And an ill wind it is indeed.  The following is a slightly edited email that I sent to my family, with photos added.


It has been a very mixed week for us.  In less than 48 hours we lost more than 8 feet of sand all along our beachfront.  We now have a small cliff that the waves slap against instead of a gently sloping beach that the waves roll onto.

This is due, we think, to the major El Nino that has taken hold and radically changed the winds blowing across the Atlantic.  (The same winds are blowing in all that Sargassum Seaweed, too.)  We mobilized our construction crew to help shore up the beach around a buttonwood tree, a tropical almond tree, and the dock.  So far the buttonwood and dock are ok and tomorrow they will start protecting the almond tree.  We are using sand bags filled with cement and sand.  This is just a band aid that will have a longterm negative impact on the situation unless we do more extensive (i.e., "expensive") work to make a breakwater out in the water about 20 feet offshore.  So we will start on that too. Big sigh as money flows like water ...

As if that wasn't disheartening enough, as I was driving into Bella Vista early Sunday morning to pick up 6 bags of cement (96 lbs each), I had a flat tire on the Monkey River Road.  I had passed only 1 person on a bicycle and was miles away from anything.  Fortunately, as I was assessing the situation, I saw a pickup truck approaching and flagged them down.  It was like a clown car - out poured 3 adult males, 2 adult females, and I never did get an accurate count of the children.  Anyway, they changed the tire for me; good thing because I wouldn't have been able to get the lug nuts off with our little piddly lug wrench and they got the donut tire on.  Now this is Sunday morning at 7:30.  So I drove to Bella Vista, a tiny village only 3 miles down the paved Southern Highway from the junction of the Monkey River Road.  I found a "24hr" tire repair place. Picture a 1950s gas station in Appalachia, sans banjo music.  And sans gas for that matter.  But they were very nice and are my new BFFs; even have them in my contacts on my phone.  Got the tire patched (it had a big nail in it) but they said the donut was better than the repaired tire, so we left the donut on the car.
As I was talking with them, I asked about cement deliveries.  One of the guys said he had a brother who sold cement. (There is always a brother or an uncle or a cousin, isn't there?)  I asked if they could make a delivery that morning since I wouldn't be able to haul any in the car with only the donut tire.  Their truck was already loaded with cement blocks ready for delivery to someone for Monday, but they rallied and got that delivery made right then! and then they delivered 40 bags to us in less than 2 hours, 40 minutes of which it took to drive the Monkey River Road.  Amazing!  I had been planning to get only 6 bags to make it through the day with our crew, so this turned out much better than what I had been trying to do.  Although again, money flows like water.  So our crew was able to finish up what they needed to for today and have the supplies they need for tomorrow.
Tomorrow, Dennis will get a new tire either in Independence or Dangriga and then drive to Belmopan and spend the night there.  He will be picking up more sand bags (empty bags) and looking for a pump that we need to make our breakwater.  On Tuesday he may have to drive on to Spanish Lookout if he can't find the right pump in Belmopan.
This afternoon was somewhat less fraught.  Our friend Percy stopped by with a nice kingfish for us that he caught out on the reef and one of the village boys came selling some fresh caught monkfish and jacks that we bought.  We now have a nicely stocked freezer and had delicious monkfish for dinner.  For dessert we had figs (purchased at Trader Joe's in SanJose CA - thanks Lizanne!) that have been soaking in port (purchased by Dennis at the Belize City Brodie's store when he picked me up at the airport) since August 15th.  The figs were accompanied by mascarpone cheese; perhaps not as lovely as the the ricotta from Cowgirl Creamery in Point Reyes Station CA (Ok, not nearly as lovely as the ricotta from Cowgirl, but we takes what we gets).  We are taste testing Black Mission Figs v Calymyrna (sp?) Figs. Calymyrna win, hands down.

Since that email, Dennis has scoured the country of Belize for the pump we need and has not been able to find one.  So we have ordered it on Amazon (free shipping in the US with Prime!) and it is on its way to our shippers (Easy Shipping to Belize) in Florida.  They will have it to us in about 3 weeks.  But he was able to purchase 1000 bags for sand.  We will use sand and cement in the bags to start constructing a breakwater about 20 feet off shore in water that is no more than 2.5 feet deep at high tide.  That should absorb some of the energy from the waves from the high winds that we have been experiencing. The plan is to set mangrove trees out there to make a living breakwater.  We expect that we will have to tend the breakwater periodically and move sand (hence the need for the pump) to shore it up.  All that sand that washed off our beach is still there, it is just in a different place out in the water instead of at the edge.  Here are some additional photos of the situation.

I couldn't bear to end the post with such dismal photos, so here is a lovely sun rise from a couple of days ago. 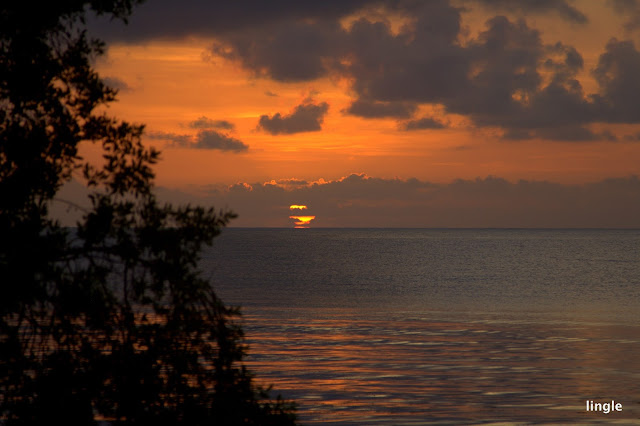 As I was pulling up some older photos of the dock, I saw that in the months of October and November, we typically gain a lot of sand on the beach.  I do hope that the El Nino that has caused the heavy waves that washed out our beach doesn't mess up the typical cycle of beach replenishment.  This is the beach I want back: