Such an exciting life we have here in the Toledo District of Belize.  The Monkey River Road dried out enough for us to attempt a road trip to … wait for it …  THE DUMP!  Why are we so anxious to get to the dump?  Keep reading.

Dennis and I noticed that we see the same damn blown-out flip-flops and other lonely single shoes; the same empty plastic bottles that formerly contained sodas, booze, shampoo, motor oil, or bleach; the same plastic remnants of personal hygiene products like deodorant, toothbrushes, combs, brushes, nail polish, toothbrushes, toothbrushes, and more toothbrushes; plastic cutlery and to-go boxes when we walk on our beach or up the each to visit our neighbors.  The common denominator of 90% (99%?) of the trash is plastic.  We (humankind, that is) are finally witnessing the consequences of the truth in Mr. McGuire’s advice to Ben (Dustin Hoffman) in the movie The Graduate:

McGuire: I just want to say one word to you. Just one word.
Ben: Yes, sir.
McGuire: Are you listening?
Ben: Yes, I am.
McGuire: Plastics.
One person's trash is another critter's trailer home.  I have seen several hermit crabs making do with plastic caps instead of shells.  We have very few shells large than 1.5 inches, except for large conch shells, around here for hermit crabs to inhabit. 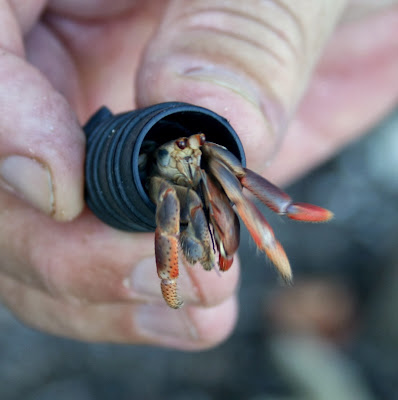 Plastics.  They have been a boon to improving the quality of life of people (and hermit crabs) worldwide – plastic syringes and other medical devices that make modern healthcare possible, plastic components that create affordable consumer goods thus making life easier and better for a greater portion of the population, and so on.  Plastics have also been the bane of the environment – increased oil production to supply the raw material from which plastics are made, increased pollution from plastics that never disintegrate, increased exposure to molecular components of plastics that adversely affect our health, and so on.  I could go into a rant about the evils of plastic, but that is not what this blog is about.

No, this blog is about our life in Englishtown, Toledo, Belize.  And we are seeing all kinds of plastic trash wash up on our beach.  So, Dennis and I recently have been on a 2-person campaign to clean the drift trash off not only our 400+ feet of beach front (which we have been doing for years), but also another 400 feet or so to the north of us.  This is the path we take to visit our neighbors at SteppingStones and Craig at the north end of Englishtown and we would like to enjoy the walk rather than be irritated by the trash.  For a couple of weeks now, we get up and first thing (even before breakfast or coffee, but after toothbrushing!) we walk up the beach and work on collecting the old beach trash and the fresh new arrivals in huge plastic (!) garbage bags.  We have filled 8 bags so far.  I was actually amazed that removing just 8 bags worth of trash would make such a noticeable difference in how the beach looks.  That amounts to 39 gallons of trash per 50 ft of beach front for the first pass of our clean-up efforts.

Because the Monkey River Road had been flooded and impassable for our Subaru Outback stationwagon since mid-October (see my previous posts about the flooding here and here), we had 2 months of our normal trash plus the 8 big bags of beach trash to get to the dump.

We loaded the first bit into the boat and Richard took us to the Monkey River dock on the north side of the river near where we keep our car.
We brought our car around to the dock and transferred the bags to the car (and some to Chris’ truck – thanks Chris!) and off we went up the Monkey River Road.  The rest of the photos are a mashup of 2 separate trips to the dump.  I got some photos related to the post about boating through the farm and down the Monkey River Road to get to the Pumping Station for the village water supply.
The only reason the road was passable at all for a car, as opposed to a truck or SUV, was because the Toledo District Road Department had been hard at work.  By the time we drove up the road, 3 or more loads of rock and gravel had been dumped at strategic spots and now the back hoe was digging deeper ditches at each side of the road.  The deeper ditches are great when there is a heavy down pour, but not very effective if the river itself floods.  All of Belize has been inundated this year.  Dave Rider at Belize -Adventures in Paradise has a nice series of blogs about the road issues up in the Corazol District.
The second time we made the trip even more gravel, rocks, and what I will call "boulders", had been dumped on the road and the crew had moved to a new site.
On the first trip up the road, Dennis drove and then I made the return down the road.  On the next trip, 2 days later, I drove up the road and managed to really hit bottom a number of times on the stretch of road in the photo below.  Of course the photo below was taken after they had "scraped" the road, moving the boulders to the side; I drove it before, while the road was still edge-to-edge boulders.
You can see where this story is headed, can't you?  Yes, I busted a hole in the oil pan.  :-(  Things were still OK when we stopped at the dump, but by the time we parked in Indy, there was an obvious oil leak.

But first -- THE DUMP!!!  We had heard that the dump had been improved and didn't know quite what to expect other than there was a gate and someone to open the gate for you.
The road into the dump is just off the Southern Highway.  Formerly, you just turned onto the dump road, took a deep breath, opened the car door and threw your trash out right there, and then got back into the car, hopefully without breathing.  And the flies were horrendous.  You didn't want to risk driving into the dump area because of all the crap that could destroy your tires.  All of that has ben covered over, new roads have been made, and there are giant pits for you to throw your garbage into.  They periodically bulldoze stuff into the pits and then burn it down.

Sadly, there are families who survive by sorting through the garbage for things to salvage.  They like to go through your stuff before you toss it into the pit.  Dennis spoke with the mother who was there with her young pre-school kids and learned that she can profit from aluminum cans and maybe glass bottles.  He told her we would start sorting our trash so we could just give her bags with the things she can trade for.

For a a dump, this place was pretty nice.  The smell wasn't too bad (I guess we have to give it time to build up), and it seemed to be laid out with a thought to the future.  They had planted trees here and there along the roads.  Dennis spotted a fork-tailed flycatcher that I was able to photograph.
After the dump, we went in to Indy to stop at the hardware store and run some other errands.  While at the hardware store, Nelson, the taxi driver we normally use when we go to Indy by boat, came in to let me know that oil was leaking from the car.  I told him about the road and he volunteered to make the repair for us while we did our other errands.  So we bought the patch kit, followed him to his house. left the car there while he drove us back into Indy. Two hours later, after we had done all our errands and eaten an early lunch, Nelson took us back to get the car.  He charged us the exorbitant price of $30 BZ (=$15 US) and while the patch had been setting up, his daughter washed the car inside and out.  We paid the $30 and gave them each a nice tip.  Not a bad deal.

We decided to road test the patch on paved roads before going back down the Monkey River Rd by making a trip to a plant nursery near the town of Dangriga.  Eleven plants later, we were ready to head home.  Below are more scenes from the Monkey River Road.
There is so much wildlife along the Monkey River Rd.  We saw a small fox (no photos), all kinds of birds, butterflies and other insects, and lizards.  I'm sure if we had gotten into the bush we would have seen lots more including snakes, scorpions, and spiders.  There are not infrequent jaguar sitings along the road.  I am anxious to make an excursion on the road and into the bush once its gets cool enough to wear long pants, long sleeves, and shoes.
Soon we were back at the dock to load the 11 plants (more on those in another post) and other purchases into the boat and get back to our sweet spot on the sea.
Since we got back on Friday (2 days ago as I write this) it has poured rain during both nights and also rained some during the days.  Don't know when we will venture onto the road again, but at least the river hasn't flooded.