I got up early on Halloween day to take a walk around the resort in a fruitless attempt to catch some bird activity.  At least I got some nice shots of the landscaping.

This lavendar-hued cactus must be a variety bred for landscaping.  We saw it in many places in Phoenix.  Looks kind off trippy to me, in a very cool way. 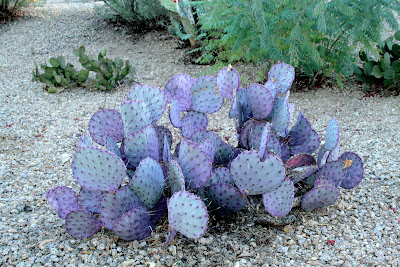 These next 2 shots are of the area around our patio. 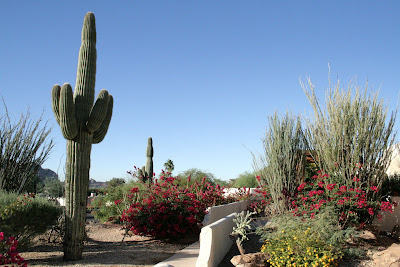 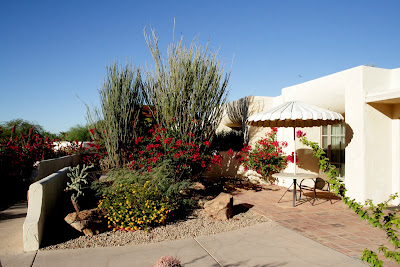 After eating our leftovers from dinner for breakfast, Dennis and I headed out to South Mountain Park for a "short" hike.  We stopped at a produce stand that I had been to the last time we were in Phoenix to pick up some food to take with us (along with our waterbottles, sunscreen, hats, camera gear, binocculars, etc.) on our hike.  We got fresh, cold concord grapes, dates, and date bars for the hike.  (aside - Arizona is a major date-growing area.)  South Mountain Park is a city park, but is on the outskirts of Phoenix and covers a huge area.  We parked at one of 2 park entrances that is just off Baseline Road at the southern edge of Phoenix.  There is a large scale map posted at a kiosk, but no hardcopy maps to take with you as you hike (cue scary music).  At 10:15 am, we set off on the Javelina Trail, one of the shortest at only 1.7 miles, that connects with the Mormon trail for the return to the car.  We took our time, lollygagging actually, stopping to take in the views and take photos along the way.

This male Costa's hummingbird let me get pretty close for these first 2 shots.  See how he raises up his throat and head feathers to display his red throat in the second shot.  Be sure to click the photos to enlarge them. 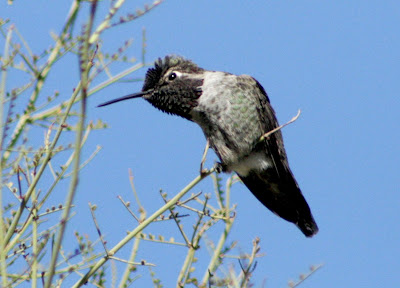 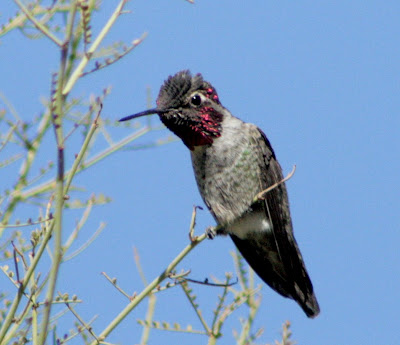 Then he flew to the other side of the bush where he continued to flash his wealth. 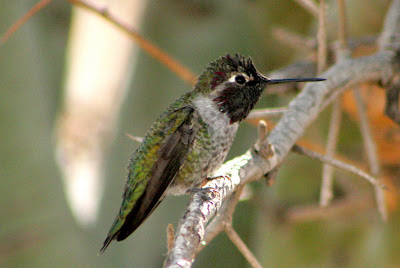 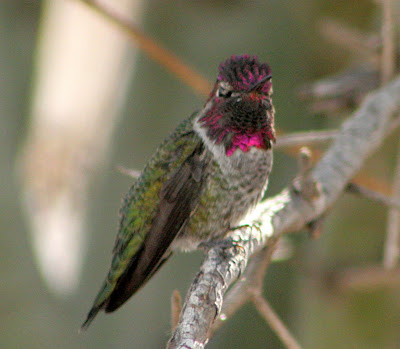 We continued on the Javelina Trail as it rose up to cross the RidgeLine Trail. 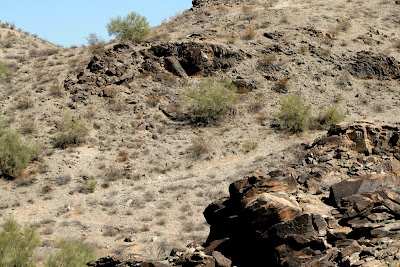 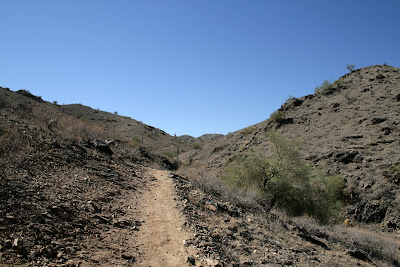 We crossed the Ridgeline Trail and headed down into the next canyon on what we thought was the Mormon Trail to head back to the car.

You can see the signs of water erosion on this rock formation; hard to envision that muchwater in this dry environment. 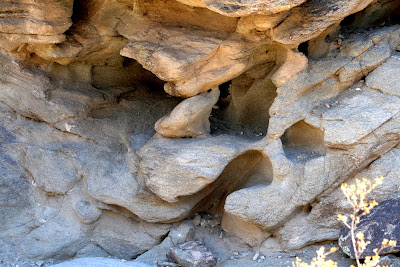 After walking another 1.5 miles, we realized that we were not heading in the right direction.  We decided to stay on the trail we were on (whatever it was) and take the next left to get us going the right way.  Since this was Saturday, there were many hikers out, so we weren't worried about getting hopelessly lost.

As we walked along the rocky trail, this red-tailed hawk zoomed by us, doing a series of victory laps around the canyon while carrying its prize snake in its talons.  You will have to excuse the fuzziness of the photos - I was standing and turning in circles following the hawk through the view finder while hand-holding the camera with the long zoom lens at 300 mm.  It is a wonder I didn't tip over from dizziness and excitement. 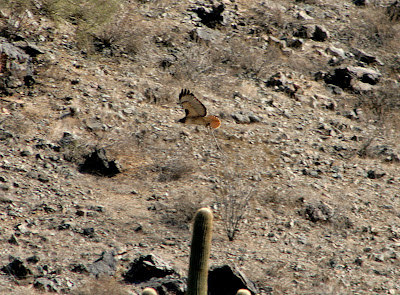 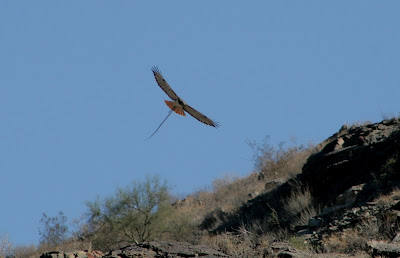 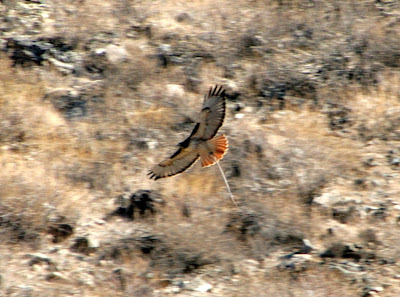 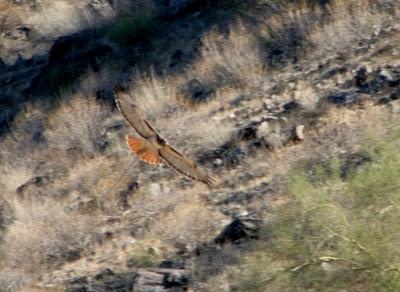 By this time we realized that we still weren't getting closer to our car.  But there were no other trails to take to the left.

The scenery had changed a bit because we were in an area with a lot of flash flood activity during heavy rains (not an issue while we were there!).  The photo below is of the Pima Wash, after the local Pima Indian Tribe.  Right now it is a river of sand, but when the rains come, it is a real river that can carry you away. 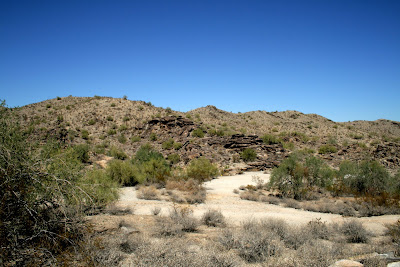 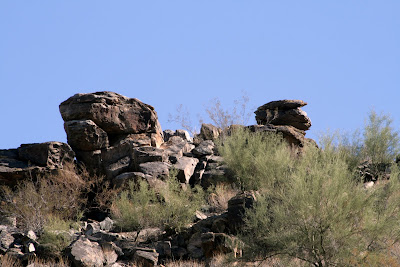 We could still see the city of Phoenix from various points. 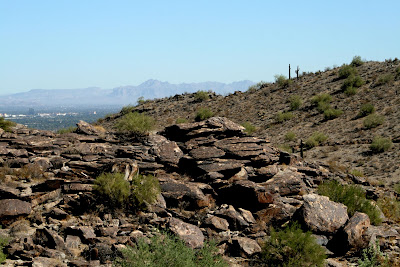 We wound up going way too far east and ended up at a different parking lot miles away from where we started.  We took this opportunity to top off our water bottles.

Fortunately, Dennis recognized the high tension power line from our hike in this park last year and we were able to get our bearings again.  We didn't have to backtrack at all.  We could see the trail that went toward the power lines, so we followed that.

It was a steep hike over the ridge.  Check out the gray squirrel atop the rock formation on the left. 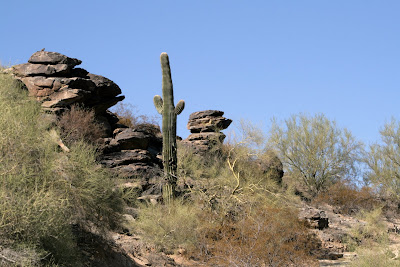 As we crossed the ridge, we saw this Gambel's quail. 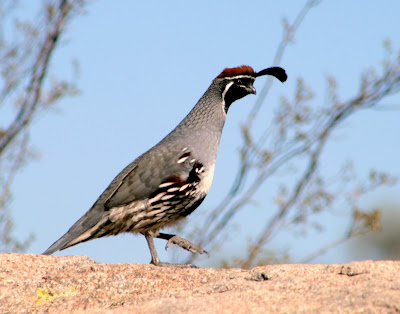 We followed the powerline for a short distance.  It was eerie to walk under the powerline because it sang its wailing and humming sound overhead.  Finally we saw a trail that we recognized from last year that headed back toward our car.  It was a relief to be back in familiar territory. 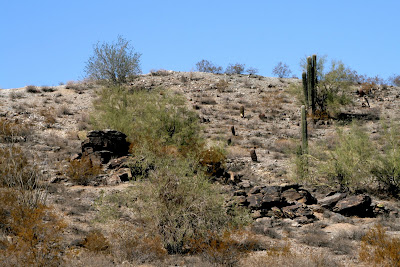 We got back to the car at 2:30, a mere 3 and 3/4 hours from when we started, no worse for the wear.  Dennis' bad knee did OK, too.  We even had food and water left over.  We looked at the map at the kiosk and figured we walked at least 6 miles instead of the 3 we had intended.  But if we hadn't gotten lost we wouldn't have seen the hawk with the snake or the Gambel's quail or heard the power lines sing.  Once again - here's to getting lost!

The next blog will have a few photos from our afternoon back at the resort, the 3rd and final part of our trip to Phoenix.