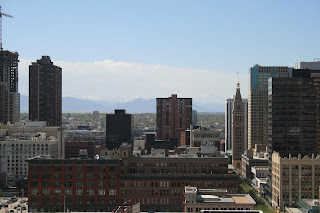 Back in May, Dennis and I went to Colorado for a loooong weekend. Our first stop was Denver to go to the (Grateful) Dead concert. Which was beyond fantastic, btw. Dennis had found a nice package deal for hotel with bus transport to and from the concert. The hotel was the newly remodeled Sheraton in downtown Denver. We flew in early enough to check into the hotel, get our wrist bands for the bus and tickets, and get settled in our room on the 19th floor (fantastic veiw of the city and mountains). We 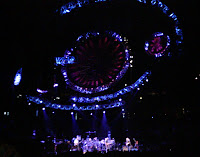 still had time to enjoy a nice glass of wine or two along with some bar food, and the weather was nice enough to be on the patio of the bar. The concert was in the Pepsi Center, which doubles as a hockey arena. Our seats were where the hockey penalty box is during games. The Dead were really at the top of their form, musically. I took these photos with my cell phone held above my head, so forgive their shakiness. 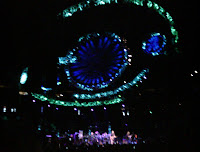 The next day we drove to Ft Collins to meet up with my sister and her husband, who were headed from Lousianna for a short stay at their soon-to-be retirement home in the CO mountains. After getting provisioned (food, wine, etc), the four of us were joined by my nephew and his wife, who live in Ft Collins, for lunch. They went back to work after lunch, but the rest of us drove into the mountains for the weekend. My sister's place is on a property easement next to Nature Conservancy wilderness. It is sort of the mountain version of our tropical place in Belize; totally off the grid, takes some effort to get to, surrounded by incredible natural beauty. The layout of their house is even similar to our cabana, with the entire front being one long room with the front wall entirely windows (in our case the room is the veranda and the windows are only screen) overlooking a spectacular view. Both houses are open with the only interior doors being bathroom doors. Each of us had bought our properties at about the same time and designed our house/cabana at the same without knowing the details of the other party. Either great minds think alike, or my sister and I inherited the same crazy gene for living at the edge, or both. ;-) Come to think of it, my brother and other sister have similar tendencies to take the path less traveled.

Later today or tomorrow I will post some photos that I took at their place. Right now I am going to enjoy some of the fabulous early summer weather here in southeastern MN.
Posted by Wilma at 9:26 AM