I've been busy with all sorts of things while over-seeing the construction - a little gardening, putting out fires, gathering documents, filling out forms, getting a medical exam, getting another medical exam because the 30 day limit of the first one had expired, photocopying - the usual.  And now we shall celebrate our minor successes from those activities.

Success #1 - our first salad with our very own home-grown lettuce!  I planted seeds that I purchased when I was in North Carolina visiting my brother back October.  I planted lettuce (Farmer's Market Blend) and cilantro in a raised container bed I made by recycling a Mennonite washing machine that had seen better days.
The trough of the washing machine is pretty deep, so I filled the bottom with pumice that had washed up the beach as a light-weight space filler.  Then I covered the pumice with tough fabric that would support the soil but still let the water drain through the bottom.  Next I put a 6 inch layer of potting soil mixed with sand and organic matter that I had composted for a couple of years. This provided a planting area of only 2ft by 2ft, but still enough to get in 2 rows of lettuce, 2 rows of cilantro, and one row of acorns.  I know - I have trees in the veg bed!  But these are acorns of the oaks that the acorn woodpeckers like and I wanted to get a couple started here to attract these great little woodpeckers to our place.  They will get transplanted very soon!

I soon realized that the delicate lettuce and cilantro need some shade protection, so I put up a frame of shade cloth which has the added benefit of keeping the heavy tropical downpours from flattening the plants.  Five weeks later we have lettuce ready to start harvesting, cilantro that is growing well, and one oak seedling that I should transplant soon. 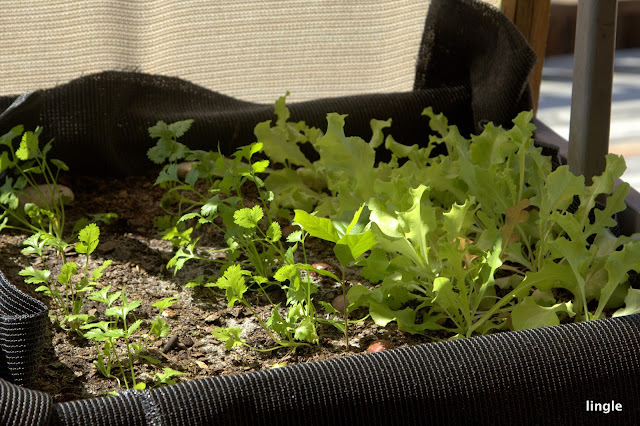 We had our first lettuce salad night before last and look forward to more fresh lettuce over the next month or so.

Success #2 - not burning down the house!  (Click here for music)  I was pre-heating the gas oven to bake some bread and noticed that the gas was making whooshing sounds and then ominously stopped.  Flames, big flames, were coming from where the supply line enters the back of the oven.  Quickly turned the gas off and pulled the stove away from the wall to see ...
The compression nut securing the line to the flange had worked loose and more gas was outside the oven than inside the oven. Turns out the nut is actually damaged and probably has been from the get go. We have likely had a gas leak for some time.  Scary.  YEA to not burning down the house!  I'll drink to that.

Success #3 - submitting my application for Belize Residency.  Finding forms, downloading forms, filling out forms, getting verified hardcopies of financial account, notarized birth certificate, medical exam, etc.  Will it ever end?  I think so, although I have been working on it for almost 9 months.  This is the story:

It took me 3 days in Belmopan, the nation's capitol, to get my residency application accepted for consideration.  I will say that everyone I encountered was unfailingly pleasant and helpful.  And it is good that Belmopan is really a small town because we had to go from one end to the other for various offices, signatures, and documents.

Day One was at the Police Station to get a Police Report generated.  That required 3 passport-type photos, BZ$25, and 6 hours.  Also I needed a letter from the Belize Income Tax Office stating that I was not delinquent on taxes.  That took only 15 minutes and no money!  (Wouldn't it be great if all encounters with Income Tax offices were so easy?) Then photocopies of the above.  By then it was almost 4:00 and Immigration closes at 4:30.  Tomorrow is another day...

On Day Two I needed to get some forms signed by a Justice of the Peace (roughly equivalent to a Notary Public in the US), so it took a while to track one down since the first 2 I tried were not in.  My friend Sue remembered that a good friend of hers was a JP, so we eventually found her and got the documents witnessed.  Finally, I got to immigration with a stack of documents 5 inches thick.

First off, I spoke to the gatekeeper who asked me my business and gave me a number to take to a window outside to get a number.  Really, that is the process - I was given a number to get a number!  At the window, I was again asked my business and was given an ORANGE 49 as my number.  This was at 10:30.  I went back to the waiting room and stood until a seat opened at around 11:30.  By noon they were on ORANGE 25, so I left for lunch when my friend Sue stopped by to see how it was going.  Got back around 1:30 and they were on ORANGE 35.  ORANGE 49 - me!  That's me! - was called at 3:00.  So I took my pack full of 5 inches of papers to the agent behind a glass partition and we began to go through the application.   I thought I had everything, but ...

My US bank statements to show that I the means of supporting myself were too old since they were from the first 3 months of 2015 (which was when I had starting putting this stuff together).  I understood the agent to say that was the only thing lacking.  The agent said if I could get them and come back before they closed at 4:30 I would not have to wait in line again.  So I called my friend Chris (of Sue and Chris) who picked me up and we raced back to their house so I could print out more current statements.  I did not feel comfortable accessing my accounts at an internet cafe, not to mention internet cafes are thin on the ground in Belize.  Got them printed out and raced back to Immigration, arriving at 4:15.  Managed to see the same agent and she asked "Did you complete the declaration of support too?"  Well, I would have had I known about it.  So that meant I had to pick up a hardcopy form from Angelus Press who has the contract the Government of Belize for legal documents, fill it out, write a description of my means of support, sign it, and get it signed by a JP!  So that meant another day, which meant getting another number to get a number ...

Day 3 found me bright and early at Jahan the JP (who is the proprietor of a little garage around the corner from the Immigration Office).  I highly recommend him; very nice and professional.  Plus you get to play with the little kitten while he (Jahan, not the kitten) reads the document.  That is one thing different from an American Notary Public, who basically only witnesses that you are really the person who signs the papers and who doesn't need to read the document.  Then by 8:30 I was at Immigration to get a number to get a number.   ORANGE 9!  Yes!!!  And they were already on ORANGE 3.  So this didn't take too long.  A different agent this time who questioned my bank statement from our Belize bank.  My heart sank.  I told her that agent yesterday had accepted it since it had been stamped and signed by the bank manager, for which I had paid BZ$5.00.  So she checked with her colleague, who was handily located right next to her, and all was well.  In fact they were the only 2 agents handling residency application intake.  She looked at the Declaration form and said I needed to pay BZ$1.50 (=US$0.75) to get it stamped and that I had to go to another window to purchase the stamps.  Actual glue down stamps of Queen Elizabeth that look very much like postage stamps.  But at least the window was in the same room and I did not have to give up my session with the agent to go get the stamps.  After getting the stamps, which the agent affixed to the Declaration form using a glue stick, each document was scrutinized.  Every page of the photocopy of my passport that had stamped entries on it had to be stamped, dated, and signed by the agent.  I have many entries on my passport because every month I have to get a renewal entry to stay in Belize (and I pay BZ$100.00 for the privilege to stay another 30 days).  In fact Dennis and I had to get extra pages inserted into our passports at the American Embassy last year because we both were running out of pages.  Good thing we did it then, too, because the US no longer allows you to get extra pages added.  After about an hour of checking documents, asking for clarifications, making corrections on the forms, and checking all the boxes on the checklist, she finally said the application was acceptable for consideration.

This meant she went to get the receipt book to write out the receipt and itemize the documents that I submitted.  Then she had to get a ledger and enter the receipt cross-indexed to a ledge number.  All this is with carbon paper and duplicate forms.  Nothing is computerized.  Then she carried the receipt upstairs to get an appointment set for my first interview (which is next week).  The interview time and date is written on the receipt.  Almost as an after thought she asked for my phone number and wrote it out at the top of the first sheet of the application documents.  The receipt has my "number", that almost mythical personal key to any further interactions with Immigration during the review process.  Don't lose that number!

Before I left, after thanking her for her patience with me - really, she had been very pleasant to work with, I asked "What is the submission date on the applications that are currently being granted residency?"  She replied "2013."  Me, searching for any encouragement, "Any from 2014?" "Only some simple ones."  Hope mine is simple.
Posted by Wilma at 3:05 PM