Thirty-three (and a Third?) An Anniversary and a Trip

October 23, 1982 was a cool, windy day in Elberton, Georgia (my hometown) when Dennis and I got married.  The next day was also cool, but with bright sunshine, when we had our reception in Athens, Georgia where I had lived since starting university there in 1972.  We celebrated our 33rd anniversary in South Englishtown, Belize a couple of weeks ago.  Aside from wanting to throttle each other from time to time, we have had a great marriage cemented by our shared passions in natural history, similar political views, and our goal (now achieved!) of living in Belize.  We prepared a simple but elegant meal to celebrate - salad of golden sweet pepper strips, lobster and mushroom Alfredo, and apricot tart accompanied by a French sparkling wine.  The apricot tart turned out fantastic and will definitely be added to my rotating repertoire of desserts.
A few days later I flew to Asheville, North Carolina, to visit my brother for 10 days and help him out after particularly extensive shoulder surgery.  Poor guy has to keep his arm in a bumper sling secured to his torso 24 hours a day for at least 8 weeks and is not allowed to drive for that time and perhaps longer depending on his progress.  My oldest sister had been here earlier.  He is doing well, but 8 weeks is a long time!  When I leave he will have 2 more weeks to go.

Asheville is in the Appalachian Mountains and is situated right next to the Blue Ridge Parkway that winds its scenic way through the Blue Ridge National Park.  My arrival coincided with the peak of the autumn leaf color, which was at least a week late this year, so unintended good timing for me.  Fortunately, my brother is feeling well enough for long outings and walks.  On Thursday, a cloudy, misty day, we walked through the Botanical Gardens of Asheville.  I got some photos of the great fall colors, mushrooms, and other features in the garden.

There were plenty of large fly agaric Amanita muscaria mushrooms, all growing under hemlock trees.
The grounds are a mix of landscaped and natural areas.  The landscaped areas feature native plants for the most part. 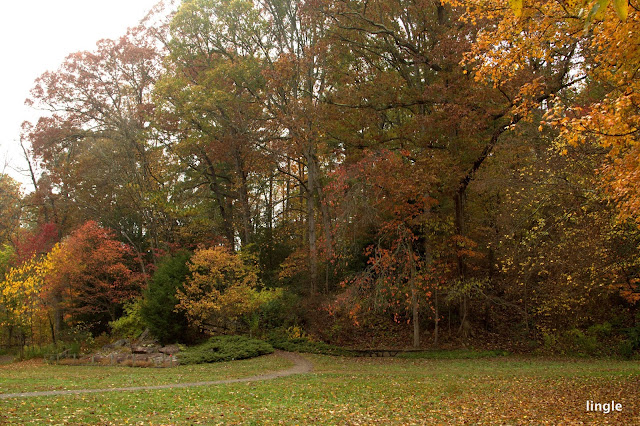 The next day, Friday, was a beautiful sunny day so we decided to do some sightseeing and leaf peeping along the Blue Ridge Parkway.  We packed a picnic lunch for a long day out.  Our first stop was at the Lake Powhatan area.  We saw more mushrooms, including these Coprinus sp., on the walk to the lake.
Lake Powhatan is at a lower altitude than our final destination.

The hike around the lake was gorgeous.
A surprise find was the mushroom Panellus stypticus, the mushroom I worked on for my PhD research.
The cool thing about Panellus is that it glows in the dark.  It is not terribly bright like some of the bioluminescent mushrooms in the tropics, but you can see a nice glow from the underside of the mushroom caps if you let your eyes dark-adapt.
We drove through some areas that were essentially tunnels of color.
Conditions were perfect for autumn colors; the rain of the previous day had cleared the air so visibility was terrific. 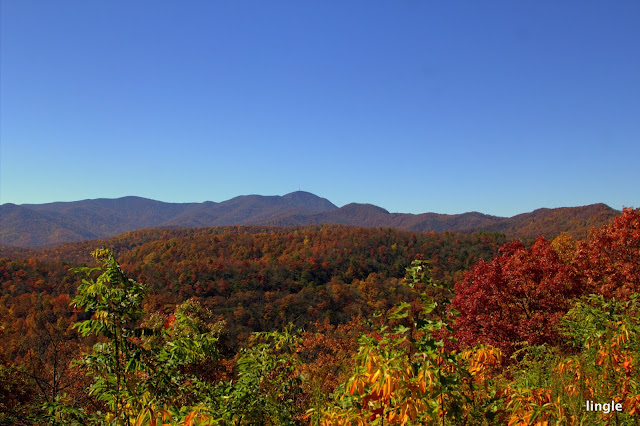 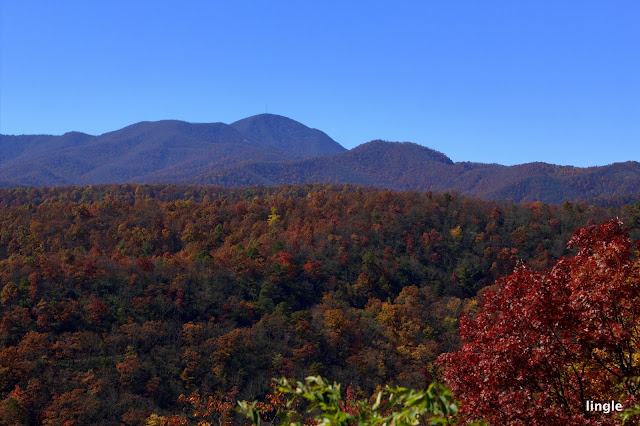 Sourwood trees have the most intense ruby-red color. 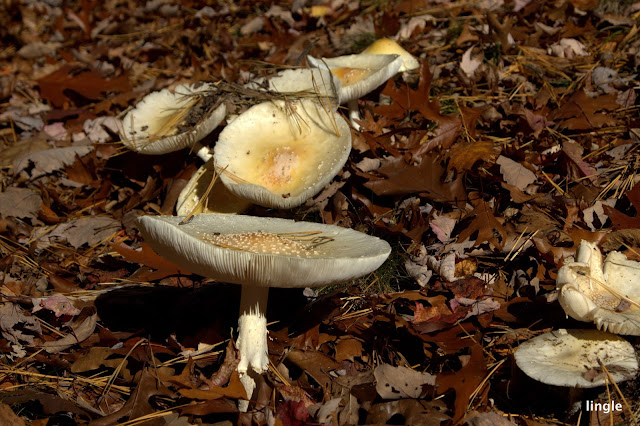 Our picnic area near Mt. Pisgah.  Another lucky thing for us was that it was Friday and not many people were around.
We hiked a bit on a trail that led to the site of a former hunting cabin owned by the Vanderbilts.  Back in the day, the only way to get here was on horseback.  It is a beautiful site.  The property was donated to the National Park Service in lieu of inheritance taxes.
We drove on up to the Pisgah Inn and Restaurant, also run by the Park Service.  A few more people were there and the Inn is usually filled to capacity this time of year.  This was as high as we went on the Parkway - close to 5000 ft, but we spent plenty of time taking in the views before we left.  The summit of Mt. Pisgah is ~5800ft. 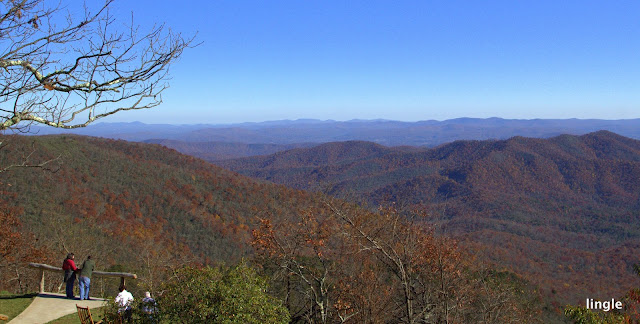