The striking Green-breasted Mango Hummingbird is the largest hummingbird to visit our feeders and the juveniles and adult females, which look very similar, will not be mistaken for any other hummingbird.   To me, they have odd coloring, like someone hastily dabbed paint on their front sides.

With that streak of dark green (black in many descriptions) down the center line of their front side, they are unmistakable.
Look how far its feet are from the perching rim on the feeder in the shot above; that is an indication of how much larger they are than our other visitors.
Its body is solid green on the backside, except for the tail.  Look at those two little accessory (for lack of a better word) feathers, one on each side just above the base of the tail.  Wonder what those are.  Anybody know?  I can't find them in any of my books or online.

Aside - As I was looking at my photos from January and February (when the above were shot), I was increasingly discouraged by the quality; things just didn't seem very sharp and there was often a sort of halo at the edges of shapes.  I did what I could with image processing to improve matters, but by March I realized that my zoom telephoto lens was having serious issues.  Even my normal zoom lens was giving me trouble.  More than 50% of the time, I couldn't even take a photo due to "error 99".  That error doesn't mean anything other than the lens and camera or battery and camera are not communicating. I was limited to an increasingly smaller (a bit of an oxymoron in that phrase) range of zoom that would work.  I tried cleaning electrical contacts, baking out moisture, cleaning more, swapping lenses between my 2 camera bodies with no satisfaction.  At the end I was shooting only on manual settings just to get the occasional shot.  I decided to get a new camera body and a new lens, a big upgrade in quality (and price) that are more resistant to dust and moisture.  I just received them yesterday and the shots below were some of the first taken with the new setup.  More on what camera and lens I got in another post; let me just say that I am very happy.  :-)  I bet you can tell that the shots below are much crisper than the ones above.  I hope my photos will improve as I learn to really use the new setup. 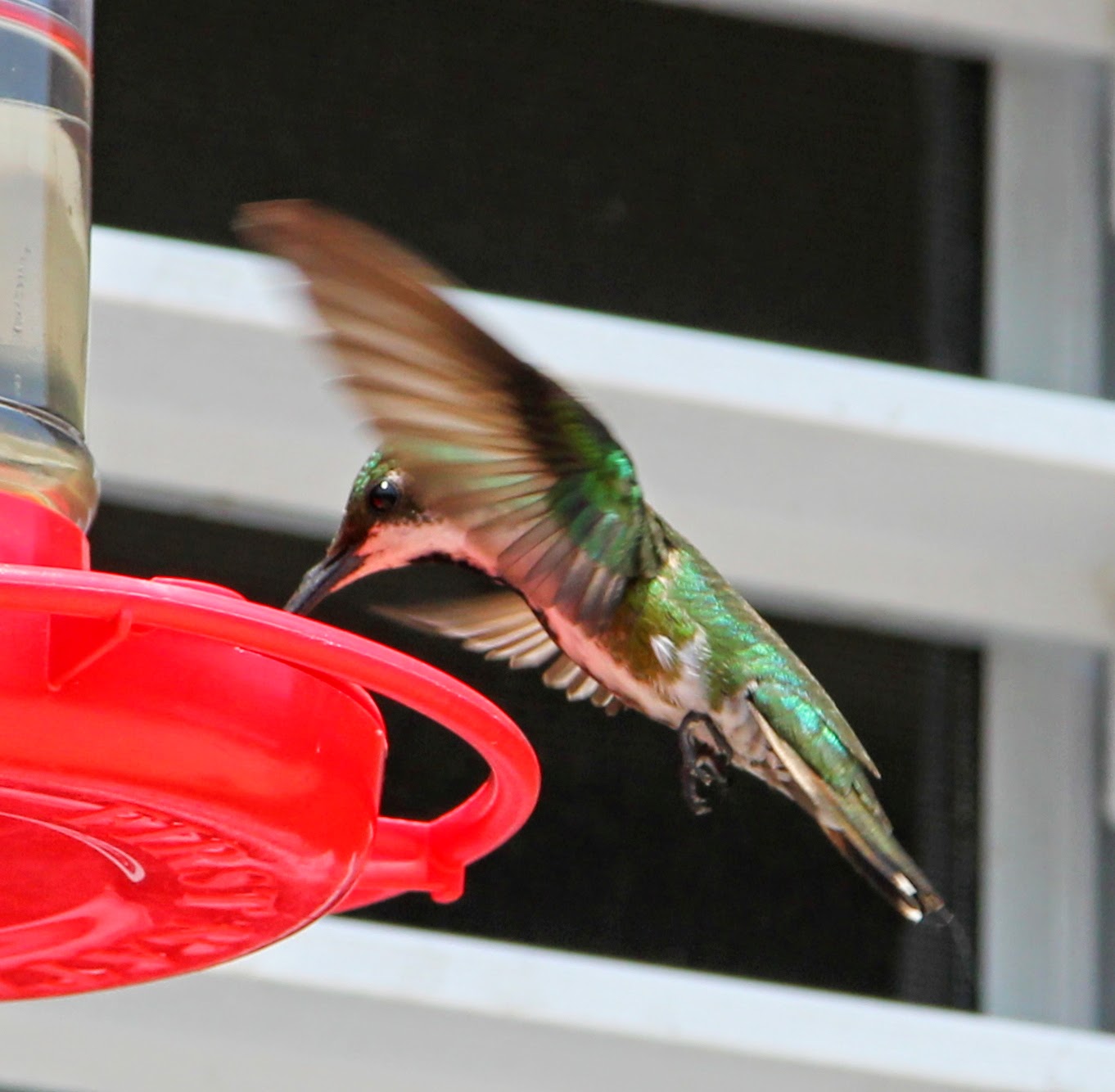 Once or twice I saw a green-breasted mango able to sit on the rim of the feeder, but 99% of the time they hover.  These are by far the largest of the hummers we have had to date.  They more than hold their own against the feisty and aggressive rufous-tailed hummers.

I don't have any photos of males yet (see camera issue above), but they also come to the feeder.  The adult males don't have any white on their throats, breast, or bellies. They are gorgeous.  I'll have photos soon!

The final, and fifth part of this series is "Hummer Wars", which shows confrontations between hummers at the feeders.  I hope to have it posted in just a few days.